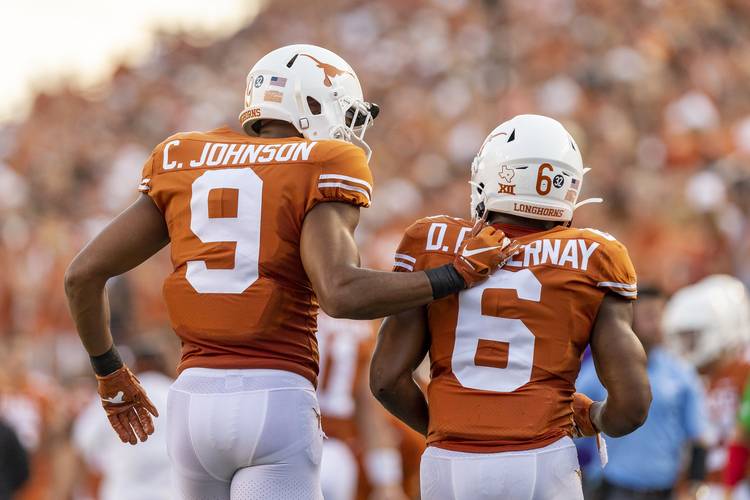 So far this season, Texas senior Devin Duvernay has caught 45 footballs and the respect of his teammates and coaches.

On Wednesday, Duvernay was named a team captain by Texas coach Tom Herman. Houston’s Tyus Bowser had previously been the only player that Herman had designated as a captain during the season. Herman told reporters on Thursday that the idea to promote Duvernay was brought to him this week by junior offensive lineman Tope Imade.

“I wish I would have been the one to think of it first, but immediately it was kind of a no-brainer,” Herman said. “I called the five captains in to make sure they were all good with it. Obviously, nobody had any objections. They were fired up. So, he gets to spend the rest of this senior year as a captain.”

Since the news about Duvernay was announced, both Herman and offensive coordinator Tim Beck have gotten a chance to explain why the receiver deserved to be named a captain.

His development off the field and on the field as a leader, vocal. Just how much he’s grown in the three years since I’ve been here, it’s unbelievable. You just see that. Early, guys rebel or maybe guys (are like) ‘Yeah Coach, I’ve got you, I know, I know, I know’ because they had success in high school or whatever. But to just ‘Hey coach… what do I need to do?’ and those guys do that and they follow through the plan and look what’s happening. He’s had an incredible season, almost storybook. Leading the country in reception (per game) and now captain. I’m really proud of him, love him. I think his development and what he stands for for our program and for a lot of young men out there is really special.”

Fittingly, Duvernay’s first appearance as a captain will come at the Cotton Bowl. As a freshman, the Sachse product scored on a 63-yard reception against Oklahoma. That was Duvernay’s first touchdown as a Longhorn, and he has scored 11 times since then.