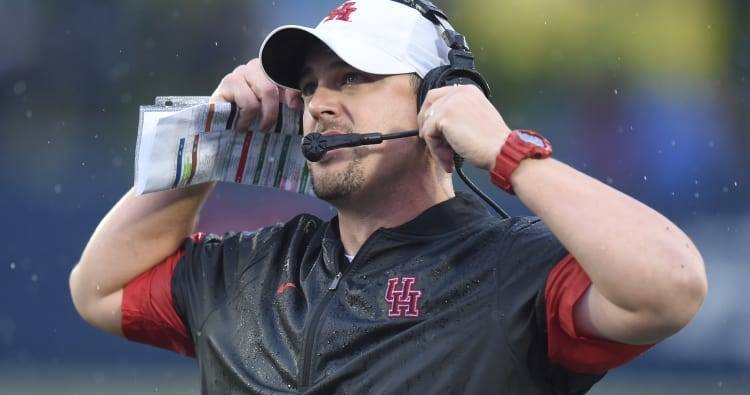 Tom Herman is coming into Texas’ football program as a shining star. Some are calling him a salvation for a program that hasn’t challenged for a national championship since 2009.

Herman’s ability to run a program has been burnished by a strong start during two seasons at Houston. It was his first head coaching job. He was the offensive coordinator for Ohio State in the Buckeyes’ 2014 national championship season.

One area in which Herman has shown a quick grasp is his ability to win big games.

In his brief career, Herman already has notched a 3-0 record against Top 10 opponents. It’s the best record of any of the 128 FBS coaches.

Herman started with an upset victory over No. 9 Florida State in the 2015 Peach Bowl while at Houston. He followed it up last season with upset victories over No. 3 Oklahoma and No. 3 Louisville.

Here’s a look at the coaches who have .500-or-better records against Top 10 opponents:

Herman will revel in having that title for at least a few more weeks before a huge early-season challenge. He’ll direct the Longhorns against USC on Sept. 16, with the Trojans likely starting the season as a top-10 team.

USC will be bent on revenge after losing the 2006 BCS title game to the Longhorns at the Rose Bowl.

And putting the first dent in Herman’s so-far impenetrable armor should add a little fire for the Trojans in that game.

The American-Statesman’s Top 25 countdown: No. 10 Michigan