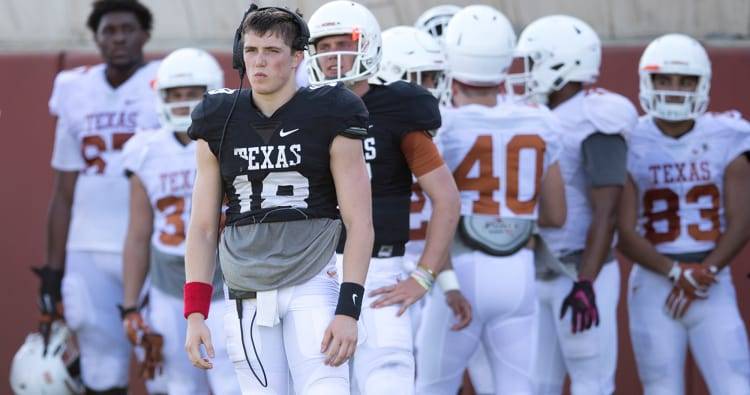 Until Tom Herman names a starter, the battle between quarterbacks Shane Buechele and Sam Ehlinger will attract plenty of attention.

Buechele, the sophomore who started every game last season, and Ehlinger, the four-star freshman, aren’t the only quarterbacks on the Texas roster, though.

The Longhorns’ roster, which was made available this week to the media, lists sophomore Josh Covey and freshmen Jimmy Morton and Blake Nevins as quarterbacks. They’re all walk-ons.

The 2016 season was littered with national stories of former walk-ons who developed into stars. Baker Mayfield, a 2013 Lake Travis graduate who won the starting job at Oklahoma and Texas Tech after walking onto both teams, was a Heisman Trophy finalist. Washington State’s Luke Falk moved within 411 yards of his school’s career passing mark. UCLA’s Mike Fafaul threw 12 touchdown passes.

Don’t expect those rags-to-riches tales to be told at Texas this fall.

At the recent Big 12 media days, Herman bemoaned Texas’ lack of depth behind Buechele and Ehlinger. He applauded Covey’s play during the spring but conceded that Jerrod Heard — the starting quarterback from 2015 who was moved to wide receiver last year — would be the Longhorns’ emergency option “if a bomb blows up and Shane and Sam both can’t finish a game.”

The role of being a walk-on quarterback at Texas is expected to be a complementary one. Walk-ons provide extra arms in practices and help with signaling in plays from the sideline on Saturdays. “That’s not going to be a role of instant gratification,” said Gene Johnson, who was Nevins’ coach at Cypress Ranch High School.

Covey, from nearby Georgetown, played at East View. He moved to quarterback his junior year after playing defensive back as a sophomore. He led East View to 16 wins and the school’s first two playoff appearances.

East View coach Rob Davies expressed surprise that Covey — who also was East View’s valedictorian in 2015 and is studying electrical engineering at UT — didn’t receive any recruiting interest from a service academy or an Ivy League school. Covey’s father, though, attended Texas, so he followed that route.

Covey, trying out for a walk-on spot, spent some time at receiver initially but after Herman arrived he was switched to quarterback, where he competed for third-string snaps. (“He’s an athletic dude, which is kind of what you want from your third quarterback,” Herman said in March). Covey threw four passes in Texas’ spring game.

“I was happy that he got an opportunity to move to quarterback,” Davies said. “To have a chance to provide some depth and use a lot of the things he did well for us, I think he’s got a chance to fill a need there and I’m glad he got a chance to do that.”

Morton went through spring drills with the Longhorns but was not on the official roster. He last played in 2015 during his senior year at San Antonio Central Catholic. He was an all-district quarterback that season.

Nevins threw for nearly 1,800 yards and 19 touchdowns in 2016. But he didn’t play football until his senior year; he was a three-year letterman in basketball. He led the Mustangs to an 11-1 record as a senior, though.

Johnson recalled Nevins being recruited by a couple of small schools. Johnson, though, said that Nevins had academic aspirations and he was glad that his former player took the walk-on route.

The post As Buechele and Ehlinger vie for starting gig, Texas’ walk-on quarterbacks find a role appeared first on HookEm.

Golden: Will Shane Buechele be loud enough for Tom Herman?