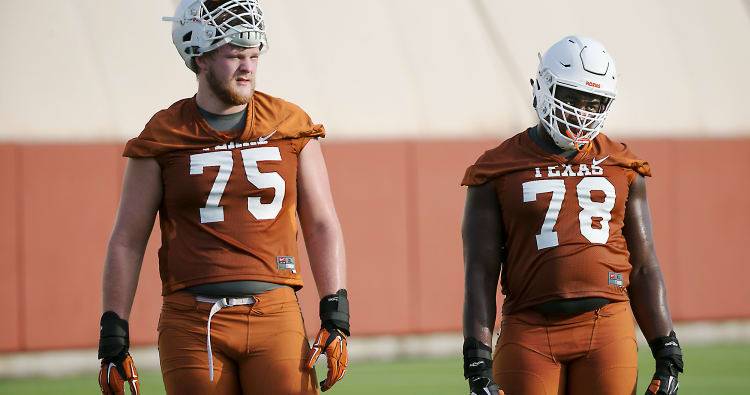 So Tom Herman hates losing, huh? Thus, by definition, he loves competitors, those unafraid to push their way to the forefront.

In March 2016 after signing with Texas, Okafor told the American-Statesman that he was eager to get on campus and push someone out of a job. “That’s exactly what I want to do,” he said at the time.

“I need to work on hand placement, extension and punching more,” Okafor said. “I’ve got to do my part so I don’t come in there on the first day, get hit in the face and think, ‘Dang, what just happened?’ I’m not nervous. I’m eager.”

By all appearances, Okafor’s opportunity has arrived. The 310-pound sophomore will spend the rest of the month battling 315-pound senior Tristan Nickelson for the right tackle spot. It’s the most intriguing position battle on the offensive line.

Tuesday brought about little front-line advancement, mostly for reasons out of their control. The players will begin wearing shoulder pads on Wednesday and don full pads on Friday. The first scrimmage is Saturday. The first two days has been shirts and Spandex.

“We’ll see what happens. The best player will get on that field,” left guard Patrick Vahe said. “I feel like they’re both very hard workers in my opinion, so we’ll have to wait and see what happens later on in fall camp.”

Nickelson has six starts in 17 career games under his belt. He started against Iowa State, Kansas State and Baylor but relented when Brandon Hodges returned from an injury. Hodges has since left the program and gone to Pittsburgh as a graduate transfer.

Standing 6-feet, 10-inches tall, Nickelson is a physical specimen. Nickelson comes from a family of college athletes. His father, Ron, was an offensive lineman at TCU. His mother, Pam, played volleyball at Texas A&M.

But whatever chits Nickelson built up with former offensive line coach Matt Mattox are now gone. New line coach Derek Warehime gave every player a clean slate, which means Okafor can win the job as easily as Nickelson can.

Standing 6-4, Okafor has a 7-foot wingspan and wears size 14 shoes. He played in 10 games last season, mostly on special teams. He was on Tyrone Swoopes’ 18-wheeler package for some extra heft.

“Both of them have deficiencies right now,” head  coach Tom Herman said. “Tristan is physically limited at times for how long and levered a guy he is. He gets his body out of position at times, but he’s always in the right spot, always on the right person. It’s just executing at the point of attack. He’s gotten better and will continue to get better at that.

“Denzel is a very fluid, long athlete,” Herman added. “He’s got some strength and power. It’s the speed of the game, going to the right place at the right time with the right technique and putting it all together.”

Offensive coordinator Tim Beck wasn’t about to give anyone the edge, either. “Coach Warehime’s done an outstanding job with those guys,” Beck said. “It will be interesting to see who those five guys will be out there.”

Most offensive line coaches really want to develop a seven- or eight-man rotation. There are plenty of Longhorns who could fill out that dance card. If the season started today, UT would probably send out Connor Williams (left tackle), Vahe (left guard, Jake McMillon (center), Elijah Rodriguez (right guard) and Nickelson (right tackle). But it doesn’t. Heck, the Horns haven’t even put pads on.

But when they do, watch the collisions at right tackle.

“It’s just about who wants it more,” Okafor said more than a year ago. “If I know somebody has beaten me to what I want, it’s just a sign that I need to work harder.”

Golden: Will Shane Buechele be loud enough for Tom Herman?