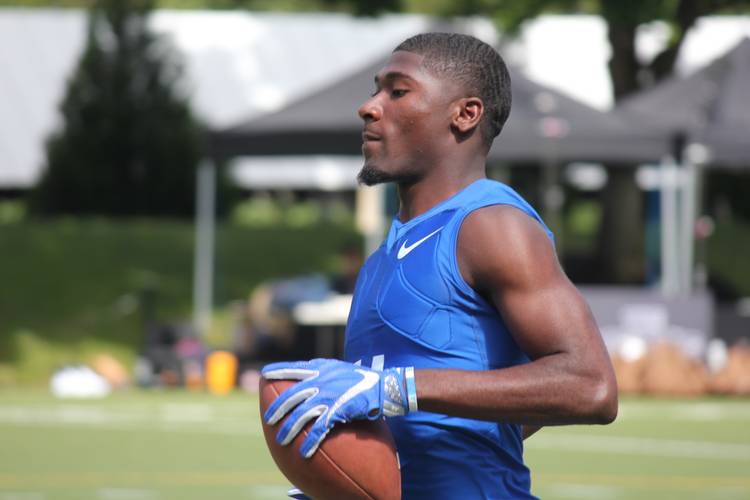 It’s all gone to plan so far, and Texas head coach Tom Herman loves a well-executed plan. The Longhorns enter August with momentum thanks to a big summer — six commitments since the beginning of June. Texas’ class consists of 14 players and ranks No. 4 nationally and No. 1 in the Big 12, per 247Sports’ composite ratings.

Three of those six summer pledges came from a trio of Houstonians in July. Four-star wide receivers Al’vonte Woodard and Brennan Eagles pulled the trigger a month removed from their trip to The Opening Final in Oregon. Four-star cornerback Jalen Green sandwiched his commitment between the two receivers.

Herman even added his first 2019 commitment when Port Neches-Groves quarterback Roschon Johnson committed at The Stars at Night event held on campus July 21.

Texas is nearly two-thirds of the way finished with the 2018 class. It’s expected the Longhorns will sign around 22 prospects, leaving eight spots remaining heading into the season. And with a newly instated early signing period for all prep athletes, the pace of commitments throughout the school year should increase.

The Longhorns hold commitments from two quarterbacks, a running back, three wide receivers, an offensive lineman, two linebackers, three safeties, a cornerback and a kicker. The balance across offense and defensive is impressive. And there are a few positions the Longhorns can essentially close shop on for the 2018 cycle barring any de-commitments.

Texas is done at quarterback, quite possibly even through the 2019 class with Johnson on board for that cycle. By the time he would hit campus to start the 2019 season, the Longhorns would have Shane Buechele, Sam Ehlinger, Casey Thompson and Cameron Rising on scholarship. It seems unlikely the Longhorns try to add a second quarterback for 2019 class, but the name to watch is Allen’s Grant Tisdale, who camped at Texas twice this summer.

The wildcard is 2018 prospect Tanner McKee. The five-star from California is interested in Texas and the Longhorns hope the 6-6 quarterback gives Texas an official visit by national signing day.

McKee won’t interfere with the recruitment of Thompson, Rising or Johnson because he doesn’t plan to enroll in college until after a two-year religious mission is served, essentially making him Texas’ early target for the 2020 class.

Texas is likely done at running back with Keaontay Ingram in the fold. The four-star from Carthage is the best three-down running back in the state and led his team to a Class 4A championship as a junior. The Longhorns took two running backs in 2017 and like the crop in the 2019 class.

Defensively, the safety and linebacker positions are essentially set. No other program in the country sports a better trio of safety commits than Texas with B.J. Foster, Caden Sterns and DeMarvion Overshown already in the fold. Byron Hobbs and Ayodele Adeoye are the two linebacker commits.

The Longhorns also want to add a fourth member to the wide receiver unit with slot receiver Jaylen Waddle and outside receiver Tommy Bush still heavily situated on the recruiting radar.

Herman wants to use the tight end position. Since taking over, he’s signed two prep tight ends and brought in a graduate transfer. He wants more future depth there and possibly a player who can provide an immediate impact in the 2018 class.

Dominick Wood-Anderson, the No. 1-ranked JUCO tight end in the country, is set to make his announcement on Tuesday; the Longhorns are still in position along with Alabama, Oregon and Louisville. No matter what he decides, the Longhorns are actively recruiting in-state four-star prospects Mustapha Muhammad and Malcolm Epps.

The cornerback position is clear. Green is one of a trio of Houston-area cornerbacks that the Longhorns covet. The other two — Anthony Cook and D’Shawn Jamison — both play at Houston Lamar, the home of Al’Vonte Woodard, who committed to Texas in July.

Theo Wease is one of three 2019 Allen prospects to earn a spot on The Next 25. The 6-3, 198-pound wide receiver is arguably the top 2019 receiver prospect in Texas; over the weekend he included Texas in his top 14.

Wease was a one-time Oklahoma commit.

Top opponents for Texas in 2017, No. 32: Oklahoma RB Rodney Anderson