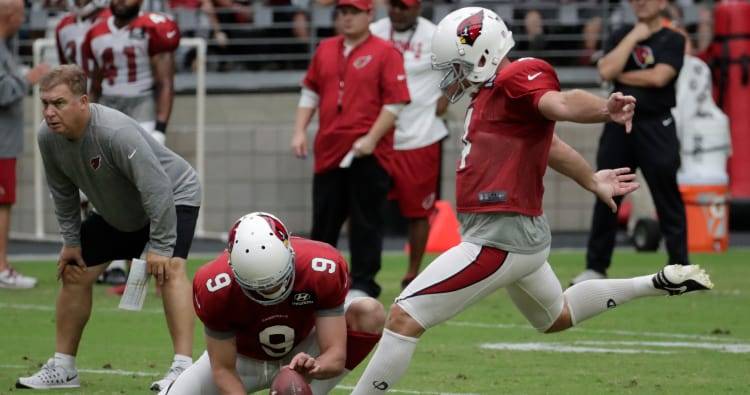 The NFL preseason starts Thursday and that means we’re just over a month away from the regular season. More than two dozen former Longhorns are participating in training camps right now. Here’s a look at some highlights for the Longhorns in the NFL.

Phil Dawson has been kicking field goals for so long that Friends, Seinfeld, Dawson’s Creek and The Fresh Prince of Bel-Air were still on the air when he started his NFL career. In fact, Dawson’s Creek, starring James Van Der Beek and Katie Holmes, hadn’t even debuted when Dawson (Phil, that is) was in his final year at the University of Texas. He enters his 19th season in the NFL this year. He spent his first 14 seasons with the Browns before moving on to the 49ers for four years. Here he is quizzing his new Arizona Cardinals teammates.

Another former Longhorn, Roy Miller, is getting a new start with a new team. Miller joins the Kansas City Chiefs’ highly-touted defense after playing with the Jacksonville Jaguars for the last four years. He started his career in Tampa Bay where he played for four seasons. Miller enters his ninth year looking to play more than just six games like he did last year.

It’s always fun to see the Red River Rivalry show up in the NFL. The former OU running back is trying to earn some playing time in a crowded backfield while Vaccaro looks to help the Saints defense improve after a bad year.

Speaking of rivalries, it looks like Longhorns and Aggies can agree on some things.

In two previous tweets former Aggie Martellus Bennett said, “I hope all these young cats that are willing to die for the game of football find a higher purpose in life.” He continued, “Look football is great but I ain’t dying for this.” Former Longhorn Keenan Robinson apparently agrees with Bennett’s assessment. Robinson is entering his second year with the Giants and had what some could consider a bounce-back season last year. He finished with 83 total tackles, seven passes defended and two stuffs.

Another linebacker out of Texas looking to improve on a solid season is Jordan Hicks of the Philadelphia Eagles. Hicks led the team in interceptions last year with five while he was second on the team in tackles with 85. He added 11 passes defended, a sack and four tackles for loss. Hicks thinks the Eagles defense can crack the top-5 this season.

The post Longhorns in the NFL: Training Camp appeared first on HookEm.