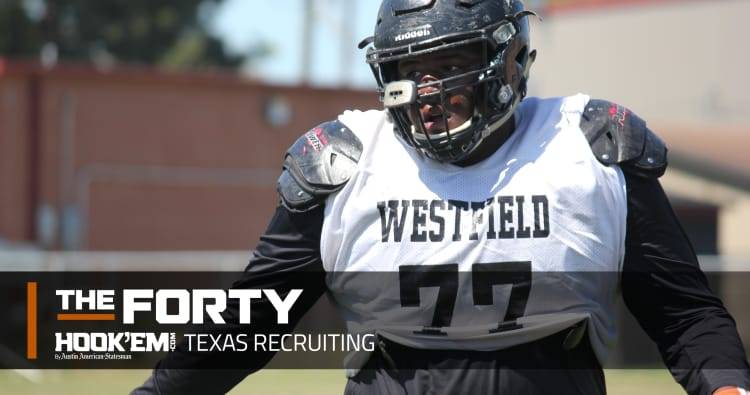 Texas fans should expect a lively recruiting dead period, which started Tuesday and will continue until the end of the month. A dead period allows no in-person contact, even if a prospect travels to campus, but electronic communications like text messages and Twitter are allowed.

That doesn’t mean Texas can’t add commits, as Tom Herman’s program showed yesterday with the commitment of JUCO tight end Dominick Wood-Anderson. The Longhorns hold 15 commitments for their 2018 class, now ranking No. 4 nationally and No. 1 in the Big 12. Texas is expected to sign around 22 prospects this cycle, meaning seven spots are theoretically up for grabs.

With football season quickly approaching, here are five targets that are leaning toward the Longhorns:

Odds of signing with Texas: 95 percent

The Longhorns locked in a day-one impact player at tight end with Wood-Anderson, the No. 1-ranked tight end prospect in the JUCO ranks. Despite signing two tight ends in 2017 and adding a graduate transfer this summer, Herman wants more depth at the position. The top target on the board leaning toward the Longhorns is Epps, a long, lean tight end who’s more evolved as a pass catcher than a run blocker at this stage of his development. He almost committed to Texas at a summer camp and could pick the Longhorns in the coming weeks.

Odds of signing with Texas: 85 percent

Jamison’s stock rose throughout the offseason as he bested top wide receivers at elite camps like The Opening and the Under Armour All-American Camp Series. He isn’t as tall as in-state cornerbacks like Jalen Green and Anthony Cook, but he makes as many plays. Jamison’s versatility makes him special. He’s played safety, linebacker and cornerback in his high school career. He excelled as a nickel corner at The Opening Final. His teammate Al’vonte Woodard committed to Texas in July and Jamison could soon follow. Texas’ competition is TCU.

Antwine is a relatively new name in Texas’ recruiting ranks. The out-of-state defensive tackle unofficially visited in April but didn’t receive an offer until July 26, a month after he committed to Ole Miss. The uncertainty surrounding the Ole Miss program caused Antwine to de-commit from the Rebels and the Longhorns quickly moved into the leader’s position. It’s a down-year in Texas for defensive tackles and Antwine gives the Longhorns another legitimate target to chase.

Odds of signing with Texas: 90 percent

Sure bets are rare in recruiting. We’re dealing with teenagers, mind you, but Coburn seems like a player destined to end up at Texas. He plays at the same high school where Herman signed Ed Oliver for Houston as well as running back Daniel Young in Herman’s first UT class. Coburn’s head coach is the brother of Texas assistant Corby Meekins, who was the head coach at Westfield during Coburn’s freshman season.

Odds of signing with Texas: 75 percent

Texas already received commitments from a trio of wide receivers who qualified for The Opening Final in Oregon over the summer. Bush would be the fourth. Bush is a long, rangy receiver with immense natural athleticism. He’s raw as  compared to Woodard, Rondale Moore and Brennan Eagles, but possesses a combination of height and speed which simply can’t be taught. He visited Texas numerous times with his family before receiving an offer, making Texas a potential destination now that he holds a UT offer.

Texas moved one step closer to signing the No. 1 player on the current Fab 55 when the five-star cornerback included the Longhorns in his top three with LSU and Ohio State. Texas holds a commitment from Houston Lamar teammate, Woodard, and leads with fellow cornerback and teammate, Jamison.

Cook was invited to The Opening Final in Oregon and is the No. 13 ranked player in the 2018 recruiting cycle, per 247Sports’ composite.

The post Next five up: Who might Texas land in the month of August? appeared first on HookEm.