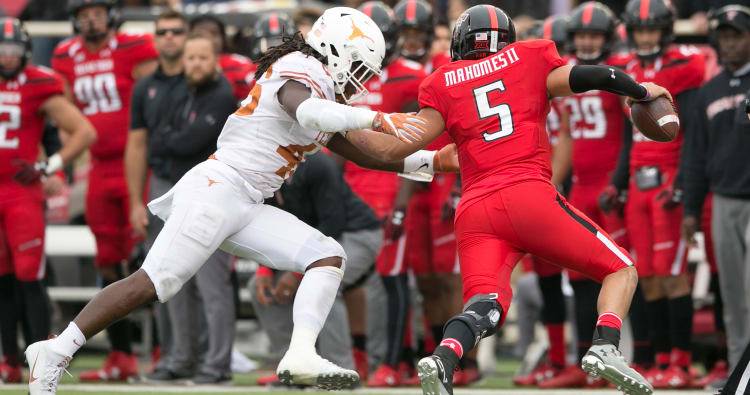 In his first interview in more than eight months, Malik Jefferson did not present himself as the unquestioned leader of the Texas football program.

He didn’t proclaim there will be dramatic improvement or drastic changes. He didn’t declare anything, really.

Since the end of the 2016 season, Jefferson has spent his days with his head down, mouth closed and eyes and ears wide open. The new coaching staff delivered the same message as the old one. Nothing is handed to anyone, not even guys who were the No. 1-recruit in the state.

Once considered the face of the Longhorns’ program, Jefferson is just trying to be a linebacker with a smile on his face once again.

“He’s done everything we’ve asked him to and more, which is fantastic,” Texas coach Tom Herman said. “You can ask him, but he’s doing a really good job.”

Jefferson and Herman sat down for a serious conversation in February about the player’s future. It was reported that meeting created a rift between the two, something Herman pushed back hard against at Big 12 media days. On Wednesday, Jefferson said, “It was good. We had a pretty long conversation, but I enjoyed every second of it.”

Jefferson never spoke to reporters during spring practice and hadn’t given any interviews until Wednesday.

“I didn’t mind it at all,” Jefferson said of the meeting. “I had a long talk with my family and we all discussed it. It’s something that I needed to do to focus on myself, to look at myself, because sometimes you’ve got to look in the mirror to find your mistakes.

“Hearing the outside noise, it’s kind of hard to distinguish that. But it definitely helped me.”

It turned heads in April when Herman went on a Houston radio station and criticized Jefferson’s  overall strength. “When we got here Malik Jefferson bench-pressed more than he squatted,” Herman said at the time. In retrospect, that wasn’t Herman blasting Jefferson; it was the truth, something Herman doles out regularly.

Fast forward to August, the tone is completely different.

“I sat in the linebacker meeting room the other night and made a comment just how different his body looked on video running around out there, his lower body specifically,” Herman said after Wednesday’s practice. “I think he’s proud of that.”

Yes, Jefferson said with a laugh, his lower body has gotten stronger. And he’s open to whatever defensive coordinator Todd Orlando wants, whether that means coming off the edge or patrolling the middle.

Last month, Orlando declined to comment about his talks with Jefferson. “I’ll keep that between him and me,” Orlando said.

Said Jefferson, “I have opened my chest and given it to coach Orlando. He knows what he’s doing. I trust him very much, and he trusts me as well. So he’s on me every day making sure that I stay fundamentally sound and encouraging me to stay the leader of that defense.”

Jefferson started nine games last season but wound up getting benched against Kansas State. He didn’t start the next week against Baylor, either. Maybe former coach Charlie Strong was simply trying to get his attention. Jefferson finished the day with a team-high 10 tackles and two sacks.

“I was kind of embarrassed for a little bit,” Jefferson said last November, “because I wasn’t really turning it around.”

He drifted into a funk. Jefferson’s mother, Teresa, came to Austin from her home in Mesquite and the two had serious heart-to-heart talks. “It doesn’t matter if you’re the face of Coca-Cola, you still have a job to do,” she told him.

Jefferson finished the year third on the team in tackles (62) and then spent the offseason with Orlando and strength coach Yancy McKnight.

Herman made it clear no player would get preferential treatment, least of all someone who isn’t fulfilling their end of the bargain.

It’s possible this coaching staff believes there’s a superstar trapped in that No. 46 jersey. Herman, Orlando, McKnight and the rest of the staff will try their damnedest to find him.

“I think he has focused his energy into being a better, not just linebacker, a better teammate and leader,” Herman said. “The dividends have been paying off. Obviously we won’t know for sure until Saturdays in the fall.”

Just ask Jefferson. He knows. He called last season “a trial,” then added “a bump in the road.”

“You’ve got to look back at it and realize from your mistakes and move forward and focus up and know that you’re better than that,” Jefferson said. “Moving on to your future endeavors, you just keep that in your mind that you can keep getting better always.

“I’ve got to step up and be a leader, and that’s everywhere — on and off the field.”

The post Texas LB Malik Jefferson: ‘Sometimes you’ve got to look in the mirror to find your mistakes’ appeared first on HookEm.

Bohls: Time for Malik to be Malik (HOOK’EM PLUS)