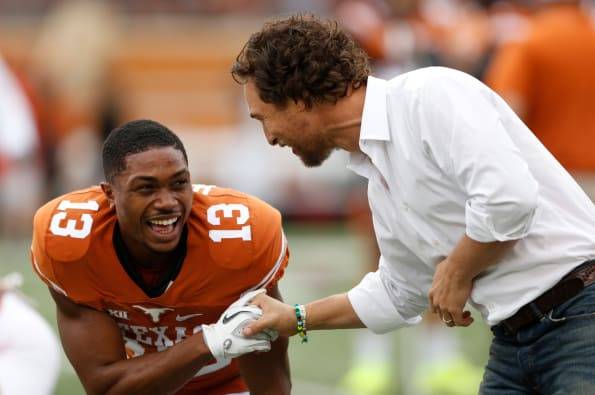 No, Jerrod Heard is not hoping that a bomb goes off this season.

Two weeks ago at Big 12 media days, Texas coach Tom Herman said that Heard, a junior wide receiver, would quarterback the Longhorns “if a bomb blows up ” and neither Shane Buechele nor Sam Ehlinger could finish a game. Heard, after all, was Texas’ starting quarterback in 2015 before he transitioned to receiver last season. He caught 24 passes and ran once out of the Wildcat formation.

Heard laughed Wednesday when asked about his status as Texas’ nuclear option. He acknowledged he’ll need to produce if that metaphorical bomb does go off, but stated he’s still “trying to be the greatest receiver.” It appears his preferred explosions at Royal-Memorial Stadium will come from Smokey the Cannon following his touchdown catches.

“I am a receiver now, (considering) how much I run,” said Heard, who is also a candidate to return punts. “I don’t even claim quarterback anymore.”

In practices, Heard said he has been asked to take a few mental reps at quarterback. He’s occasionally dusted off his right arm with a throw or two during 7-on-7 competition. Most of his work, though, is done with his hands.

Two years ago, Heard threw for 1,214 yards and completed 58 percent of his passes. He thinks those passing stats are still relevant and Herman didn’t disagree. In fact, two of Herman’s former quarterbacks — Ohio State’s Braxton Miller and Houston’s Greg Ward Jr. — have transitioned into NFL receivers.

“I think the best tight ends and wide receivers are former quarterbacks,” Herman said. “They truly know coverages, they know the ins and outs, they know defenses, they know where holes are, they know even body posture and demeanor of defenders and what that means. I think it’s a big advantage for him, just that knowledge of defenses and secondaries.”

In his first year as a receiver, Heard ranked sixth on the team in receptions. He averaged 11.1 yards per catch and tied for the team lead with three touchdown catches. He caught a pass in nine of Texas’ 12 games, including a six-reception performance against UTEP.

Leaned on as a leader this offseason, Heard returns to a crowded receiving room. Between senior Armanti Foreman (34 catches) and junior John Burt (18), six receivers had at least 18 catches last year. Redshirt freshman Reggie Hemphill-Mapps — who has been paired with Heard as a “little brother” — is coming off a breakout spring and Jordan Pouncey was a three-star member of UT’s 2017 signing class.

No Longhorns receiver made the 45-player preseason watch list for the Biletnikoff Award or was mentioned on the All-Big 12 preseason team. Heard, though, thinks they’ll have a chance to make some highlights this season. When asked what he and his fellow receivers do well, Heard said “go deep” without much hesitation.

“I feel like we’ve got guys that can go deep and get the ball,” Heard said. “There’s no way we shouldn’t. That’s a real strong plus and that’s what we love to do.”