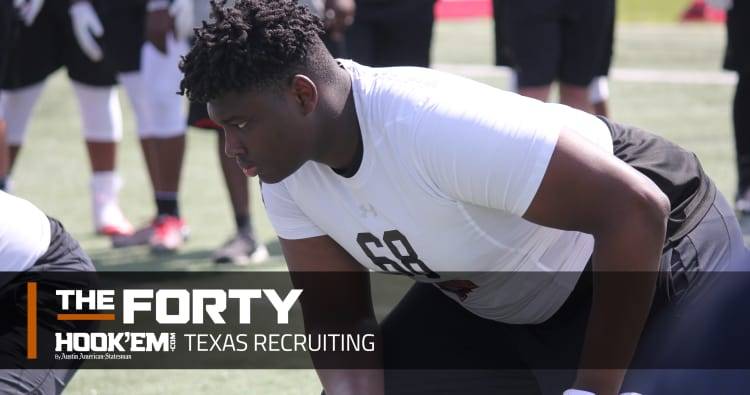 Texas moved one step closer to closing out the 2018 class Tuesday night when tight end Dominick Wood-Anderson pledged to Tom Herman’s program. Wood-Anderson, ranked as the No. 1 JUCO tight end in the country by 247Sports’ composite, became Texas’ 15th commitment.

With around 22 spots open, Texas is two-thirds of the way to completing the class barring a de-commitment or two. While the main focus for the staff will remain on 2018, the numbers committed means Herman’s group can start building stronger relationships with 2019 and 2020 prospects.

The Longhorns began the 2019 class with a commitment from Port Neches-Groves quarterback Roschon Johnson. The four-star dual-threat announced his decision July 21 at Texas’ inaugural Stars at Night recruiting showcase. He remains the lone pledge for the class.

Don’t expect Johnson to remain the only 2019 commitment for long. With that in mind, let’s look at five offensive prospects the Longhorn are chasing in the 2019 class. All rankings are from the 247Sports composite. We’ll focus on the defensive prospects on Friday.

It might strike some as odd for an IMG Academy product to be one of Texas’ top targets. Cain is a unique case, however, because of his ties to the state of Texas. He became a household name in prep football as a freshman at Denton Guyer when he earned MaxPreps Freshman All-American honors. As a sophomore he earned second-team all-state honors. Cain visited a UT camp this summer and holds the Longhorns high among his 21 current offers.

The do-everything athlete from Cuero included Texas in his top four along with Florida, Texas A&M and UCLA. He’s made multiple visits to UT since Herman took the job and extended an offer, and the Longhorns are confident in eventually landing him. As a sophomore, Whittington scored a touchdown as a rusher, a receiver, a defensive back, a punt returner and a kick returner. He’s special with the ball in his hands and most likely will be a wide receiver in college.

One of these Universities will have my pledge. God bless

Thomas is an LSU commit. But that isn’t stopping Texas from pursuing the best interior offensive line prospect in the 2019 class. Thomas made his way to UT during the spring and recently returned for another unofficial visit. He committed to LSU way back in July 2016 and the Tigers rarely lose elite in-state talent. Still, Texas getting him on campus means the Longhorns stand a chance.

Texas is one of nine schools to offer Bragg, who many consider the top center prospect in the country. He received his offer July 19 after camping at UT. He made a return trip two days after receiving the offer for the Stars at Night event. Texas didn’t sign a true center in 2017 and isn’t on track to sign one in 2018 either. Bragg is the lone center prospect in the 2019 class to hold an offer, making him a top priority for the staff.

Wow!! Extremely blessed to receive my 9th offer from my childhood dream school, The UNIVERSITY OF TEXAS!!! #HookEm🤘

Green is another LSU pledge that the Longhorns won’t stop chasing until national signing day or when they fill their needs at tackle for 2019. He’s the top offensive line prospect in the state in his cycle and would likely be the top-rated offensive lineman in 2018 as well. The Longhorns also are in pursuit of in-state tackles Tyler Johnson and Javonne Shepherd, but there’s no doubting Green is the best of the trio.

The post Current recruiting success is allowing Longhorns to focus on future appeared first on HookEm.

Bohls: How is Tom Herman fighting entitlement in the football program? (HOOK’EM PLUS)