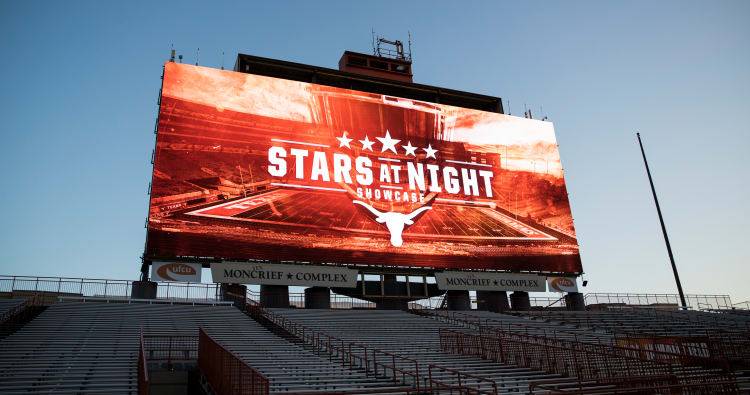 Every athletic director gets a boatload of complaints every Monday after home football games. Either the parking is too far away, the popcorn was stale or there’s too many ads on the video board.

“The first year I got here, I began getting complaints from people about the inconsistency of the sound system,” Texas men’s athletic director Mike Perrin said.

The hulking, 11-year-old video board in the south end zone at Royal-Memorial Stadium, once named Godzillatron, is also showing its age. “It was great when it was new,” Perrin said, “but it was time to make some changes.”

In a bid to improve the overall fan experience, UT officials on Thursday announced sweeping audio, visual and technological upgrades being made inside the stadium that will be ready for the 2017 season.

New speakers, a new video board and a stronger cellphone signal? This sounds like stadium nirvana. School officials are purposely hoping they can under-promise and over-deliver, and they admit the new upgrades will be tweaked throughout September. All in, Perrin said the school spent $6 million.

“The younger people like to watch what’s going on the field but also text each other during the game, or taking selfies in the stands,” Perrin said. “The whole idea of connectivity is so important, so we felt like we had to upgrade that as well.”

The upgrade announcement came one day after the American-Statesman reported that season ticket sales are down slightly for the 2017 season. UT officials privately hope that a better fan experience with a better team will turn those numbers around.

Austin-based Big House Sound oversaw the installation of 384 speakers throughout the stadium, including 48 18-inch sub-woofers. The same company just recently finished a complete sound overhaul at Rice Stadium in Houston.

As for what’s playing on the speakers on game day, that’s a Tom Herman question. The new coach has been involved in choosing specific playlists for pre-game warmups and even certain songs for specific in-game moments.

Some UT fans may need to brace themselves. They may not hear Willie Nelson or George Strait 45 minutes to kickoff.

Former coach Charlie Strong put speakers on the field in 2014 to blast hip-hop music, something the players loved. Meanwhile, country or pop music blared from the stadium speakers, thus creating a musical mess. After some fan complaints, those field speakers disappeared by midseason and Strong gave up the fight.

Herman is taking the music issue head on.

“For me, the biggest thing in terms of being involved in that is one, our players,” Herman said after Thursday’s practice. “What songs are we playing on third down? When we run down on kickoff, what are we showing on the video board? And the recruits. I want to make sure recruits have a great time at our games.”

Perrin said the type of music will vary based on how much time is left before kickoff and whether or not the team is on the field. “Again, it’ll be collaborative,” he said.

UT changed the landscape with a gigantic video board that cost $8 million in 2006. It measured 134 feet long by 55 feet high. It was the largest video board in the world at the time, one that required special parts to work at full capacity.

Over time, technology got better and Godzillatron slowly became obsolete. Now all new stadiums have oversized video boards. Just last season, UT’s board flickered off and on at various points or the colors would look out of whack.

Technology company ANC won the contract to install a new video system that contains 14,000 square feet of LED technology. Frankly, it looks like a giant HD-quality television hanging over the south end zone. The new video board measures 134.38 feet wide by 55.85 feet high, totaling 7,505 square feet. In a press release, ANC officials said the new board will be the fourth-largest in the NCAA.

Herman’s creative team will control part of the messaging that’s shown on the new video board, school officials said.

ANC also installed 770 feet of ribbon board that runs down the east and west facade, the stadium tunnels and end zones. Those ribbon boards can show advertisements, out-of-town scores or other pertinent fan information.

Multiple carriers, like AT&T and Verizon, contributed to the technology upgrades; UT did not spend a dime, officials said. The school refused to say whether certain carriers have better coverage than others going forward.

“I think both the sound and the connectivity are going to require a little give-and-take over a few games,” Perrin said. “They’re going to vary depending on where people are seated and how much they’re trying to use mobile devices and what the bandwidth are at different times.”

Of course, the product on the field matters, too.

“Hopefully everybody that enters the stadium will have a good time when they leave,” Herman said. “And you know, the fan experience is a lot better when you win.”

The post Major upgrades, including a video board even bigger than Godzillatron, in store at DKR appeared first on HookEm.