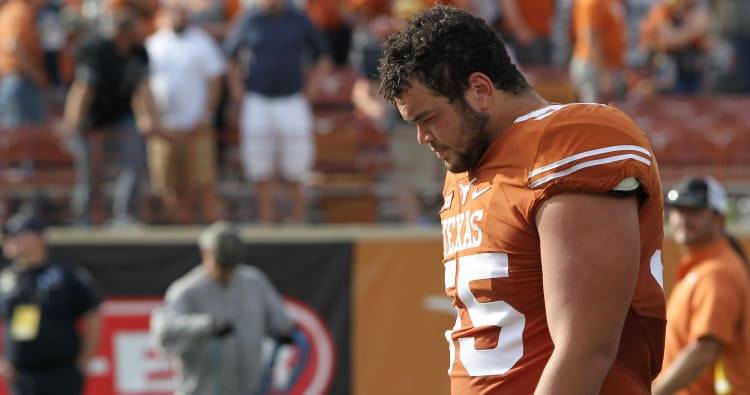 Another NFL draft came and went this spring, and now it’s been nine years since Texas had an offensive lineman drafted. Simply embarrassing. Tony Hills, taken in the fourth round in 2008, was literally the last in a generation.

In Williams, the Longhorns have a bona fide superstar at left tackle, a junior who started from the first day he arrived and one who will likely jump into the NFL draft early next year. That ugly nine-year streak is coming to an end soon.

“It hurts a little bit,” said Dan Neil, a two-time All-American lineman in 1995 and ’96 who won two Super Bowls with the Broncos. “If he were to stay four years, you could make the claim he’s the greatest offensive lineman at UT.”

Wait, best ever? Let’s examine that caveat. “He’d be a three-time All-America guy, four-time All-Big 12 and a top-five pick,” Neil said. “I can’t think of anybody who would have accomplished that at UT.”

And as Neil adds, “That’s not Podunk School, that’s UT!”

So will this be Williams’ last season in burnt orange?

Sounds like a politically correct answer. “That is the real answer,” he said. “My focus is taking it day by day.”

The 6-6, 320-pound mauler first came across as a mouse. In interviews as a freshman, Williams spoke in soft, short sentences. Only later he revealed that was all done intentionally. He simply isn’t a brash person. And he’s no lug-head, either. This is a man well on his way to a degree from UT’s prestigious McCombs School of Business.

The coach wanted Williams to take more of an active leadership role this summer, that’s for sure. Every time Williams stepped foot inside the football building, he had to be with a teammate. Another offensive lineman or someone else, Williams said. It didn’t matter who. It’s an idea Herman openly admits he stole from Ohio State coach Urban Meyer.

The fence-riders, as Herman called them, or those who are “compliant but not convicted” need to see how an elite athlete carries himself on a daily basis, Herman said. Sure, it’s easy to hang with left guard Patrick Vahe. But what about defensive linemen or defensive backs? Or even specialists?

“It’s probably the biggest challenge I’ve had since I’ve been here,” Williams admitted. “My degree is in business finance, and that would definitely carry on into he business world — being a leader.”

Behind the scenes, perhaps Williams isn’t so shy after all.

“Man, Connor’s an outgoing guy, that’s something you’ve got to realize,” Vahe said. “He’s a very goofy guy. So him coming out of his shell, that’s nothing new.”

If anything, Williams has proven he can adapt. In three seasons, he’s had three offensive line coaches — Joe Wickline, Matt Mattox and now Derek Warehime. Last year Williams became only the fourth sophomore in school history to be named first-team All-America.

Pro Football Focus calculated that Williams has allowed only 21 quarterback pressures the last two seasons. That’s a staggering total for an athlete who has played almost every offensive minute of 23 career games.

During the offseason, Williams said he wanted to work on strengthening his overall game. That means keeping his footwork and composure after driving defenders back into the linebackers. Offensive linemen always can improve their hand placement and overall body lean.

Williams praised new strength coach Yancy McKnight and said, “It’s crazy how much stronger we are.”

Now, all that’s left for Williams is to win. Think about this: the first-team All-America offensive tackle hasn’t even played in a bowl game. The Longhorns have gone 10-14 since Williams arrived.

Best lineman ever at Texas? That designation may ultimately be true, but if the Longhorns can’t turn the tide, he’ll always have another caveat. Williams can’t become the best offensive lineman at Texas who never won a championship.

“Being a recruit, you come to Texas and you expect to hold big trophies,” Williams said. “You expect to win big games, and we haven’t been doing that. I think the kids are buying in because we believe in that and want to do that. We’ve been handed the blueprint, and I think we’re very excited.”

With “pads popping” for the first time, Texas trades in shorts for game-day situations