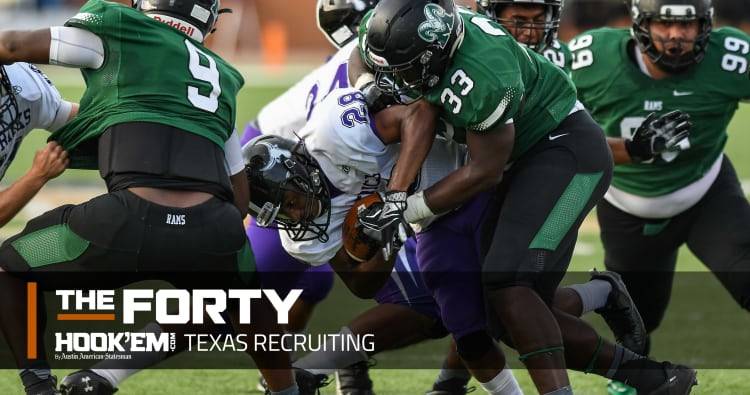 As we mentioned in The Forty yesterday, Texas is two-thirds of the way towards filling its 2018 class with 15 commitments and an expected 22 scholarship offers to hand out in the cycle. The main recruiting focus for the staff remains keeping the current commits content while adding to a class now ranked No. 3 in the nation and No. 1 in the Big 12.

It also allows Texas to move toward building stronger bonds with upcoming juniors and sophomores. Tom Herman’s program gained its first commit of the 2019 cycle on July 21 when Port Neches-Groves quarterback Roschon Johnson announced his decision at the Longhorns’ Stars at Night recruiting event.

After examining five offensive prospects in the 2019 class Texas fans should know, we turn our attention to a defensive prospect at each position already holding a Texas offer.

Stripling is one of four 2019 defensive ends with an offer and the only one weighing more than 240 pounds. The four-star prospect proved he belonged with the state’s elite at The Opening regional and The Under Armour All-American Camp Series. He lacks the ideal length for a defensive end but makes up for it with a low center of gravity and man-like strength.

Leal is ideally suited to play multiple spots in an odd-man front. He has the frame to become a nose guard and the athleticism to remain athletically superior to most offensive linemen. His future position depends on his physical growth. Leal is currently the only defensive tackle holding a Texas offer for 2019. He plays with explosiveness and creates penetration from the interior, traits that UT defensive coordinator Todd Orlando loves in linemen.

Brooks is the only 2019 linebacker with a Texas offer, meaning he’s among the school’s top targets in the cycle. He will remind many Texas fans of current Longhorns pledge Byron Hobbs. Brooks’ length, athleticism and raw strength allow him position versatility in high school and in college. He’s long enough to grow into a three-down defensive end or remain a stand-up linebacker who specializes in rushing off the edge.

Banks is one of two 2019 cornerbacks holding a Texas offer. He’s the only in-state cornerback with an offer and plays at the same high school as 2018 tight end target Malcolm Epps. Banks possesses the type of height and athleticism Texas searches for in cornerbacks and the staff is familiar with him from their time scouting DeKaney.

Williams is arguably the top talent in Texas for the 2019 cycle and the Longhorns will remain in the fight for his commitment through his senior season. He has family ties to Arkansas but has said that doesn’t make him a lock for the Razorbacks. Texas holds commitments from three elite safeties for 2018 and it is unclear whether that type of young talent will entice more four- and five-star prospects to join the fold or if it will be a deterrent on the depth chart for a player like Williams.

Break out the pads: Three observations from Texas’ fifth practice of fall camp