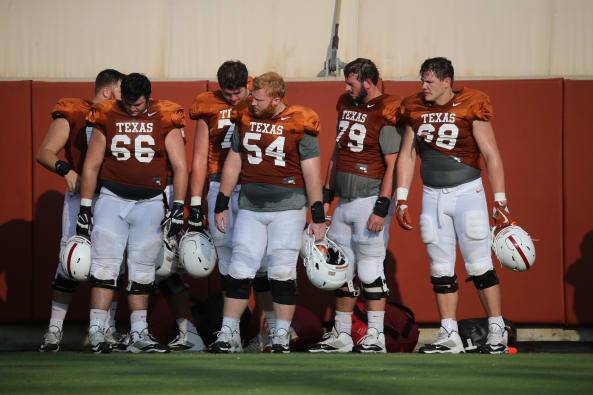 The Longhorns returned to wearing pads at practice on Friday, and perhaps nobody was happier than head coach Tom Herman … who was wearing shorts. A vocal opponent of evaluating players in non-contact situations — “I’m never going to comment on anybody’s performance in shorts. It’s not football,” he said in March — Herman relished the chance to put his team in game-like settings. He told the players as much in a meeting on Thursday.

“They grow up in this generation of 7-on-7 … It builds certain skills but it’s definitely not real football,” Herman said. “They understand the importance of putting full pads on and tackling to the ground. Training as real as we can and simulating game-like situations is how you get better, and they believe in that.”

Following UT’s first day in pads, it appeared that the team’s MVP was strength and conditioning coach Yancy McKnight. Herman applauded the off-season work of McKnight and his staff, and noted the pad levels and hip explosion of his defensive players had improved since the spring. Defensive back P.J. Locke III and left tackle Connor Williams also complimented McKnight.

Williams said he had discussed with teammates Naashon Hughes and Patrick Vahe about how much stronger and conditioned the Longhorns seemed. Locke suggested that McKnight shared Herman’s attention to detail.

“Each workout has a purpose to it, and it definitely showed today,” Locke said. “I felt a lot of pads popping. I felt some force from my running backs today.”

With the players in pads, Texas was able to begin the installation of goal-line and red-zone packages. Herman said that’s his traditional approach to the first day in pads, since “we want to put them in as physical of situations as we can.” That was welcome news to the offensive linemen, who had been biding their time.

Earlier in the week, Vahe joked that the pad-less practices were “a teaser, all the D-lineman are laughing at us.” Williams agreed, saying the first few days of practice were frustrating for an offensive lineman. Friday, though, was the offensive line’s Monday.

“The offensive line was ready,” Williams said. “We came out with good energy today and I feel like we won the day today.”

Texas returns to the field on Saturday for a scrimmage. Herman said the scrimmage, which should last around two hours but is closed to both the public and the media, will partially feature his starters competing against each other. The backups also will battle.

“Right now, I just want to see effort,” Locke said. “We can fix mistakes, but you can’t fix effort.”

Notes: Herman said that junior offensive lineman Elijah Rodriguez — not Tristan Nickelson or Denzel Okafor — would be the right tackle if the season started on Friday. Rodriguez (6-6, 300) has started three times and has appeared in 19 games. … Redshirt freshman receiver Reggie Hemphill-Mapps caught some footballs on Friday, but he wore a green jersey and did not participate in contact drills. He left Thursday’s practice after feeling dizzy. … Running back Kirk Johnson will not play in Saturday’s scrimmage. Herman was optimistic that the sophomore will return from his hamstring injury on Monday.

The post With “pads popping” for the first time, Texas trades in shorts for game-day situations appeared first on HookEm.