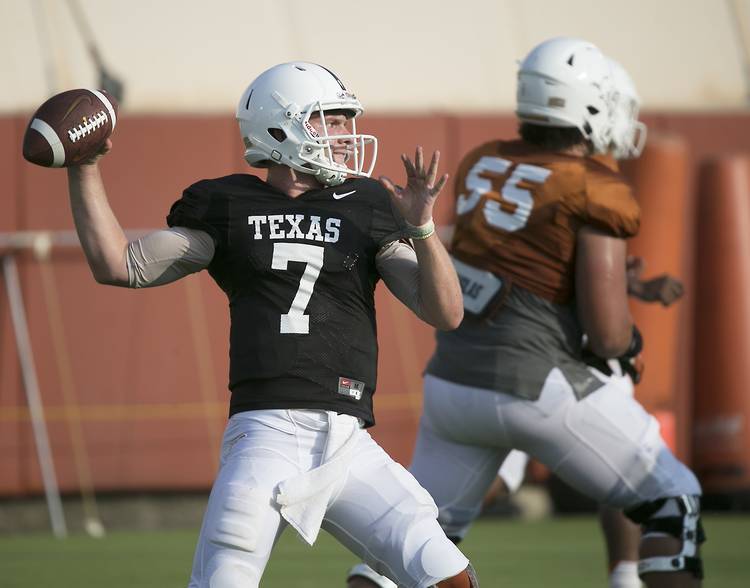 It’s the total opposite from freshman Sam Ehlinger, a charismatic person who lights up the room and drew Herman’s attention early on.

Herman and offensive coordinator Tim Beck have spent months coaxing Buechele to speak up, become more assertive both on the field and off. During Saturday’s 55-play scrimmage, there may have been a breakthrough moment.

“I heard him scream, which was really cool,” Herman said. “Hearing his voice is really cool.”

Herman hasn’t officially declared Buechele the starter just yet, but things are trending that way. The smart money has always been on Buechele, who threw for almost 3,000 yards last season. “Two thousand, nine hundred and fifty-eight,” Herman rattled off.

Still, no wallflowers are allowed with this coaching staff, especially at the most prized position.

Herman said the coaches have told Buechele over and over that his voice could be powerful. Starting quarterbacks at this school better carry themselves with confidence, or things will go south fast.

“Those are a big part of his early meetings,” Herman said. “You’ve got the pelts on the wall, you’ve earned their respect. Yeah, you didn’t earn win as many games as you would have liked. But you played hurt, and you played tough and played through a lot of stuff. There’s not a guy on this team that doesn’t respect you.”

Hall leaves early: Safety Jason Hall took a huge blow during Saturday’s scrimmage and left the field for an examination. Texas officials never use the word concussion. The school said Hall had a “head injury” and was being evaluated. There was no timetable for his return.

“He likes to hit people,” Herman said of Hall. The coach estimated that Hall got about halfway through the scrimmage before leaving.

Also, receiver Reggie Hemphill-Mapps was back at full speed after leaving practice early on Thursday due to dizziness.

Breaking it down: Herman declined to get into specifics about Saturday’s scrimmage, other than “It was hot.” The on-field heat index reached 109 degrees around 11 a.m., about the same time Texas and Maryland will start on Sept. 2.

Herman said the team was “pretty far” into the installation of base offense and defense. “There’s a few special situations that we don’t have in just yet, but probably over three-quarters of what we’re going to is being ran out there,” Herman said.

No players were made available to reporters on Saturday. The team will take its mandatory day off on Sunday and return to work Monday.