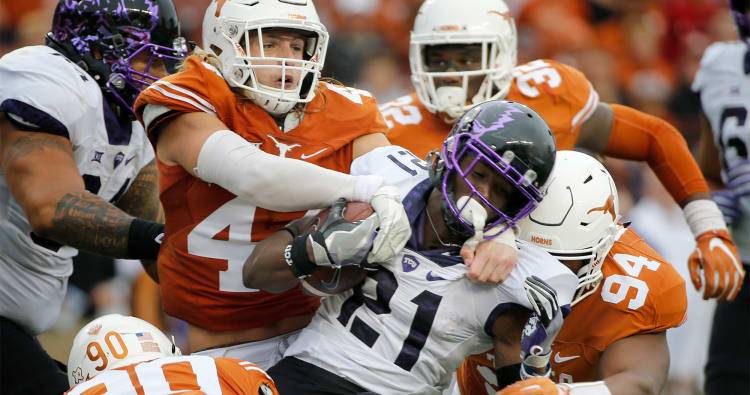 Suddenly, TCU’s Kyle Hicks has become one of the torch bearers for Big 12 running backs. Hicks was the seventh-leading rusher in the conference last season, compiling 1,042 yards and 12 touchdowns on 203 carries. He also led the Horned Frogs in receptions, with 47 for 417 yards. He was one of only two running backs — along with West Virginia’s Justin Crawford — represented at Big 12 media days.

In April, Hicks became the first TCU running back to be named the team’s MVP since LaDanian Tomlinson. While he’s not LT, Hicks does have a diverse skill set. He’s a patient runner with good vision. You’ll see him jump outside often if the initial hole is clogged up, and his combination of size (5-foot-10, 210 pounds), speed and agility makes him tough to bring down. He’s become an extra receiver for defenses to track, which will become an even bigger headache if Kenny Hill improves as expected.

Hicks had a ho-hum 16 carries for 58 yards against the Longhorns in coach Charlie Strong’s last game. It was actually Darius Anderson, now a sophomore, who broke off the 70-yard touchdown in the fourth quarter.

The post Top opponents for Texas in 2017, No. 28: TCU RB Kyle Hicks appeared first on HookEm.

Bruce Feldman: Tom Herman ‘coach of the year’ candidate, as is you know who