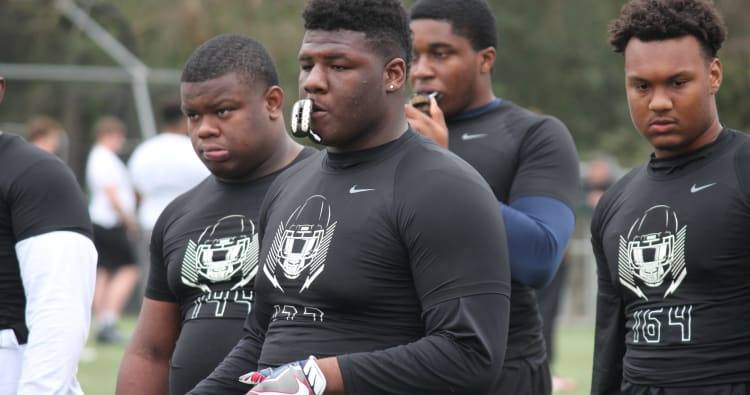 Tom Herman didn’t need a single snap as head coach at Texas to breathe new life into the program. The Longhorns moved to 16 commitments in the 2018 class Monday afternoon when four-star defensive tackle Keondre Coburn announced his commitment to the Longhorns on Twitter. He is the lone defensive lineman currently committed to Texas in the cycle.

Let’s get to know the defensive tackle from Houston Westfield.

Skill set: Coburn is a run-stopper with enough athleticism to create penetration against the run and the pass. He’s the consensus top defensive tackle in Texas for the 2018 cycle because of his sheer strength and quickness. Coburn is a shorter defensive tackle at just 6-foot-1, sporting a similar build to current starter Poona Ford.

Coburn is ranked as the No. 103 player nationally and the No. 8 defensive tackle in the nation, per 247Sports Composite. The 329-pounder ranked No. 11 on the original Fabulous 55. He’s one of just a handful of linemen in Texas during the cycle to warrant four-star status in a down year for big men.

Immediate impact: It’s hard to expect young defensive linemen to make an immediate impact as true freshmen. The sheer size and strength of offensive linemen is completely different and most young players on both sides of the trenches usually need a redshirt season and time in the weight room before earning snaps. This might hold true for Coburn, but don’t count out the four-star from playing time in 2018 because Ford is exiting the program and Texas doesn’t have many players of Coburn’s size on the roster.

Fitting into the program: Coburn will know what to expect from Herman and his staff. Coburn played under Texas assistant coach Corby Meekins at Westfield as a true freshman before Meekins joined Herman’s staff at Houston. Meekins’ brother, Matt, is Coburn’s current head coach and his former teammate, running back Daniel Young, signed with Texas in the 2017 class. Coburn is used to hard-nosed coaching and won’t be shocked by the intensity of the Longhorns program.

Recruiting at the position: Texas’ switch to an odd-man front makes predicting the defensive line a tough chore. The Longhorns extended seven offers to defensive tackles in the 2018 class despite knowing Coburn was likely heading to Austin. That means Texas wouldn’t mind adding another body at defensive tackle before national signing day. The leading candidates are Bobby Brown and Israel Antwine.