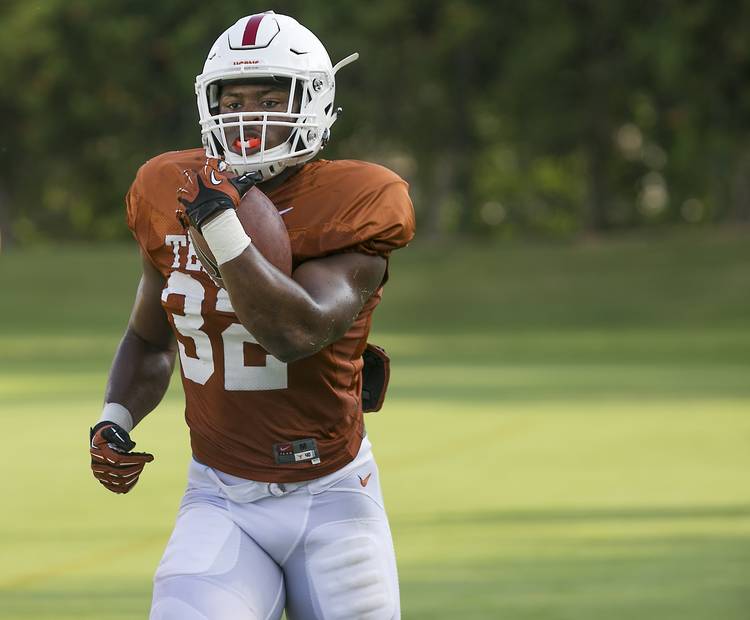 By earning his stripes, freshman defensive end Ta’Quon Graham has removed one.

Since Texas began practicing last week, the team’s newcomers have been spotted with red stripes decorating their helmets. Head coach Tom Herman previously explained that the red stripes were indicators of which players were “pledging,” if you will, to the football team. (Some Longhorns also wear black stripes on their helmets for video purposes).

“They’re not quite members of the family yet; they’ve got to go prove it on the practice field and at some point they’ll get that stripe off,” Herman said on Friday.

Defensive coordinator Todd Orlando said Monday that Graham was the first Longhorn to get his stripe removed. Orlando mentioned how impressed he was with the 6-4, 280-pound Graham’s ability to quickly learn and comprehend UT’s defensive schemes.

“He was the first one (to get his red stripe removed),” Orlando said. “That tells you a little something right there.”

A four-star recruit from Temple, Graham originally pledged to play for former coach Charlie Strong. Graham, though, remained committed to the Longhorns after Herman was hired and Texas gained a player who registered 10 sacks his senior year.

In February, Graham became one piece of UT’s 18-member recruiting class. Longhorns fans might get to know some of those newcomers this fall.

“Could be up to nine guys that you’re going to count on for quality minutes,” Herman said. “I think that’s a pretty good percentage of a true freshman class that can survive out there.”

On Monday, linebacker Gary Johnson wasn’t mentioned while Herman was naming newcomers who may play this season. Johnson, a junior who transferred in from Dodge City Community College, did have his name dropped a few minutes later by Orlando, though.

Practice notes: Herman said that senior safety Jason Hall has been diagnosed with a concussion. … Defensive end Malcolm Roach suffered a toe sprain and running back Kirk Johnson, who had been sidelined by a hamstring injury, was a partial participant. … Herman announced that the MVPs of Saturday’s scrimmage were left guard Patrick Vahe and safety DeShon Elliott.

The post Ta’Quon Graham among the impressive newcomers as Texas enters second week of practices appeared first on HookEm.