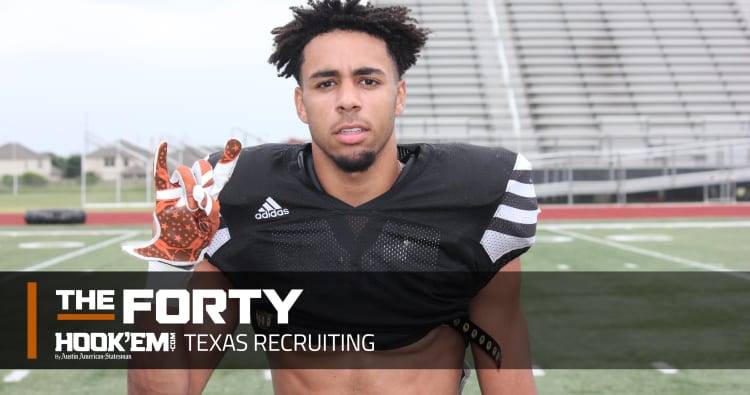 The Texas Longhorns enter the second week of August with 15 commitments and it’s likely the Longhorns add a commitment or two before the season starts. Tom Herman’s 2018 recruiting class currently ranks No. 3 in the nation and No. 1 in the Big 12.

This success can’t be solely contributed to in-state success. Five of Texas’ 15 pledges play outside of the state of Texas, including both quarterbacks, Casey Thompson (Okla.) and Cameron Rising (Calif.).

Yet a bulk of Herman’s recruiting rebound in the 2018 class should be attributed to his ability to land the state’s top talent. He initially failed to reel in those same four- and five-star talents when he inherited the Texas job. Questions arose about his ability to recruit at a power school. Questions that Herman is answering with authority.

Heading into the 2017 season, we’re updating the Fabulous 55 list later this week. Texas pledges will be well-represented on the updated list. There are four players in the state with a claim as the state’s top player. Three of them are committed to Texas and the other is one of the Longhorns’ top targets.

Here are the arguments for the top spot on the list for each of those four players.

Cook was named the Fab 55’s No. 1 player in February because of his combination of length, speed and technical skill. He’s a long-time cornerback and his understanding of the position is a level above most prep cornerbacks. Cook doesn’t simply rely on his athletic ability like most high school corners. He uses technique to erase his side of the field.

Cook hails from Houston Lamar, known as DB High in the Texas high school football ranks because of its knack for producing college talent in the secondary. Cook ranks among the best the school has produced and his offer lists reflects that reputation. It’s believed Cook is down to Ohio State and Texas.

Foster might be the easy choice for state’s top player. Without injury during his sophomore and junior season, the two-way star might be the state’s consensus No. 1 player. He’s that athletic and talented when his body allows him to stay on the field. As a running back and a defensive back, he uses his natural athleticism to overwhelm opponents.

Foster will play safety in college. He returned to The Opening Final for the second consecutive year to perform in live action for the first time since a knee injury ended his junior year midway through the 2016 season. Despite some obvious and understood rust, he improved throughout the event and showcased why he’s ranked the No. 1 safety prospect in the nation.

Sterns is the No. 2-ranked safety in the nation, trailing only Foster. He’s a hard-nosed safety with the coverage ability of a cornerback. Texas is so confident in his ability to cover that Sterns has suggested he’ll start his Texas career as a cornerback.

Sterns specializes as a safety in high school with the ability to cover slot receivers and tight ends. He’s also one of the top run-stopping safeties in the state. He recorded 82 tackles and three interceptions as a junior, helping Cibolo Steele reach the state title game. His brother, Jordan, was an all-conference performer at Oklahoma State and is now on the Kansas City Chiefs’ roster.

Sterns was one of the top performers at The Opening Final in Oregon. He played safety during 7-on-7 pool play but showed cornerback coverage skills during 1-on-1s early in the week against some of the top wide receiver prospects in the country.

The long, lean cornerback from Houston Heights oozes potential and seems to improve every time he shows up to a camp. Green is the most physically imposing cornerback in the state, possessing a tall frame and long arms to go with natural strength. He was the best player from Texas at The Opening Final in Oregon earlier in the summer, recording six interceptions in one day of action.

Green was a one-time quarterback and didn’t begin playing cornerback until his sophomore year. He’s grown into the position and continues to improve. Many college coaches and high school scouts call him the state’s top defensive back in a cycle dominated by elite in-state defensive backs.

The post Texas commitments are in the race for state’s top prep player distinction appeared first on HookEm.