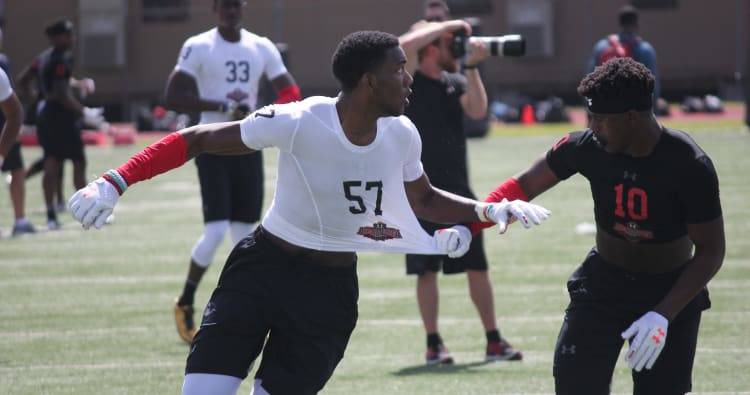 In less than a week, Texas’ 2018 recruiting class went from lacking to stacked at the tight end position. It began Aug. 1 when the nation’s No. 1 JUCO tight end, Dominick Wood-Anderson, chose the Longhorns over Alabama and Louisville.

The success continued Saturday when four-star Malcolm Epps of DeKaney High School chose Texas over offers from Texas A&M, Alabama, Florida State and others. Epps became Texas’ 17th commitment in the 2018 recruiting class, which currently ranks as the third best recruiting class in the nation and the best in the Big 12, per 247Sports.

Let’s get to know Epps.

Skill set: Epps is not yet a three-down tight end. He currently lacks the physicality and bulk to be an effective in-line blocker at the college level. The 6-foot-5, 220-pound tight end prospect does offer a unique blend of athleticism and size rarely found at the prep level. Former basketball players found a path in the NFL trading dunks for touchdown catches. Epps hopes to be ahead of the curve, physically resembling a small forward more than a football player.

Epps is a willing blocker and growth is possible as he gets older and spends time in a college weight program. Epps isn’t an elite recruit because of his blocking skills, however. Epps, a one-time Alabama commit, is wanted by numerous colleges because of the potential matchup nightmares he can create for opposing defensive coordinators.

He’s in no way a finished product and Thom Herman demands a level of physicality that Epps must match to eventually earn playing time. Herman also covets tight ends and offensive weapons who specialize. Epps’ specialty, at least early, will be as a tall, lanky weapon on third down and in the red zone. Epps is too tall for cornerbacks and athletic enough to win against safeties.

Immediate impact: The lack of true tight ends at Texas during the current decade is obvious to any observer. Herman, and offensive coordinator Tim Beck, want to utilize the tight end to exploit the middle of the field and keep opponents in base defense. A player like Epps can line up as a traditional tight end, flex out as a wide receiver or play H-Back, much like 2017 signee Cade Brewer. Epps’ unique height and wingspan may allow him early opportunities to make plays on obvious passing situations. He should excel at jump balls at any level.

Fitting into the program: Epps is another Houston-area product following Herman to Texas. Epps first built a relationship with Herman and most of his staff while they coached Houston. The Longhorns clearly want and need more quality depth in the tight end room. Texas signed two tight ends in the 2017 class and brought in a grad transfer over the summer. The Longhorns are on pace to sign two more in the 2018 class. Epps possesses a good shot of carving out a role if he can continue to improve his all-around game.

Recruiting at the position: It would appear Texas is done at the tight end position in the 2018 class with Wood-Anderson and Epps now in the fold. Wood-Anderson gives the Longhorns a player who can compete for a starting spot as soon as he arrives on campus, while Epps gives Texas a player with long-term potential and a unique skill set. Fort Bend Ridge Point tight end Mustapha Muhammad was also a top target of the Longhorns.

Lost but not forgotten, Texas tight ends are making a comeback under Tom Herman