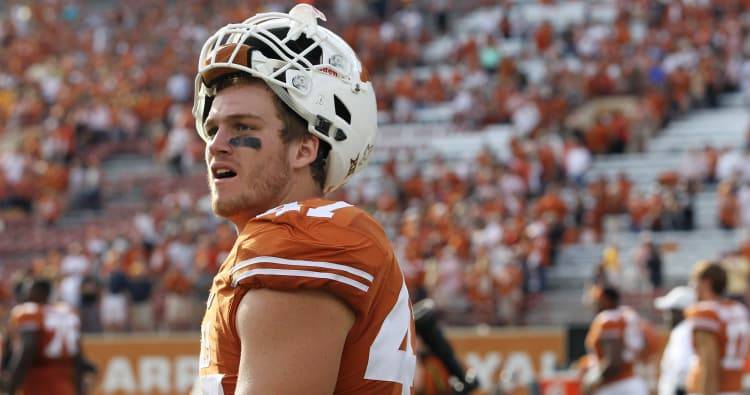 Pardon the laughs, but Tom Herman must’ve been tilting at windmills this spring when he worried about the tight end position.

Come now, do any Texas fans even remember what a tight end does? During the Charlie Strong era, that position became an afterthought.

Geoff Swaim did have 10 catches in 2014. Caleb Bluiett had eight in 2015, and Andrew Beck had four last year. As Swaim once famously said, “That ain’t (expletive).”

It can’t get any worse, right? “That is very true,” Beck said.

Herman takes the position seriously, though. The last two years at Houston, Tyler McCloskey caught 37 passes for 390 yards and five touchdowns. That’s double the numbers that Beck, a senior, has posted the last three years at Texas.

This latest commit from H-Town has everyone in the office like….. #RevolUTion18 #ThisIsTexas pic.twitter.com/UOmDqprGBH

Make no mistake, the tight end appears to be en vogue again under this coaching staff.

“It’s important on offense to get your best 11 guys on the field and figure out a way to make sure you’re doing that without straying too far from your core beliefs of what you want to be on offense,” Herman said. “We want to play with a tight end but we’re not going to be so bull-headed to say that if the tight end is not one of our 11 best players that we’re going to put him out there just because we want a tight end.”

Herman had real concerns in March, mostly because the position was so thin.

Beck has a fairly diverse injury history but is back to 100 percent now. His primary function last season was to serve as a lead blocker for Tyrone Swoopes in the 18-wheeler package. Garrett Gray has played in 10 career games, mostly on special teams. Otherwise, that was it.

It’s arguable that freshman Cade Brewer of Lake Travis is here based on the strength of one catch against crosstown rival Westlake in the playoffs. He made six the entire game, but one deep ball over the middle with a defender draped all over him was outstanding. Herman was there that night. “I turned to our recruiting guy and said, ‘Yeah, we should probably offer that kid,’” Herman said.

For a while, it appeared that Reese Leitao, another freshman, wouldn’t make it to Austin. The 6-4 recruit from Jenks, Okla., pled guilty to misdemeanor drug possession after being arrested for selling Xanax on school grounds. UT officials ultimately allowed him to join the program.

After the first practice in full pads, Herman said of Brewer and Leitao, “They need to get stronger, but they certainly weren’t scared.”

In late July, graduate transfer Kendall Moore finished up his school work at Syracuse to receive final clearance to join Texas for his final season. He’s had 14 catches for 150 yards and two touchdowns in four seasons with the Orange.

Now the position has two veterans and three versatile youngsters. And more firepower is on the way.

“That group has really changed from the spring time when we were decimated with injuries and depth,” offensive coordinator Tim Beck said. “Obviously, that’s a pleasant surprise for us going in at this point after 7-8 practices.”

The historical definition of a tight end has been obliterated. Sure, most teams still use an extra blocker that can get a clean release from the line of scrimmage and get open. But spread offenses have put “tight ends” in the slot, turning them into open-field targets.

“This position will do a little bit of everything,” Beck said. “Whatever the coaches tell us to do, obviously. But we’ve been all over, from split out to (lining up) in the backfield and everything in between.”

Rodriguez injured: Right tackle Elijah Rodriguez suffered a right ankle injury on Tuesday during the portion of practice open to reporters. He had to be helped off the field and was putting no weight on his right leg. UT officials later classified it as a high ankle sprain.

The post Lost but not forgotten, Texas tight ends are making a comeback under Tom Herman appeared first on HookEm.