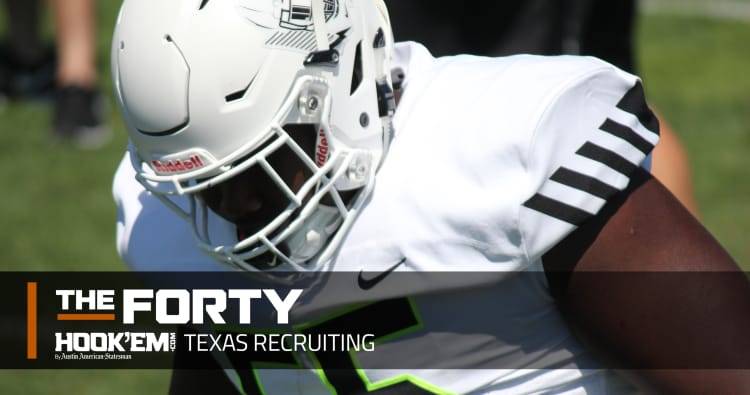 Stay updated on the latest Texas Longhorns recruiting news brought to you by Mike Craven of Hookem.com. The Forty will publish M-F at 10 a.m. each morning to provide Texas fans with an in-depth look at the latest for the Longhorns on the recruiting trail

Tom Herman’s program will always rely on in-state talent for the bulk of recruiting classes. The state of Texas is rich with football prospects on a yearly basis. That doesn’t mean Herman should ignore talent outside of his borders.

Recruiting works in cycles. It’s impossible to expect the state to produce talent at every position every year. The 2018 class is ripe with wide receivers and defensive backs but lacking in elite depth at quarterback, offensive linemen and defensive linemen. Herman showed a willingness to recruit out of state when he gained commitments from quarterbacks Casey Thompson and Cameron Rising.

Texas’ 2018 class consists of 16 commitments, the latest coming Monday with Spring Westfield defensive tackle Keonte Coburn. Five of those 16 players are from outside the state. The class ranks No. 4 in the nation and No. 1 in the Big 12, per 247Sports’ composite. The Longhorns still need another wide receiver, a tight end, a couple of linemen on both sides of the football and two cornerbacks.

Texas is eyeing in-state talent to fill the needs at tight end and cornerback, but the Longhorns might be forced out of Texas to find solutions along the offensive and defensive line. Texas currently only has one commitment on the offensive and defensive line. Here are a few out-of-state targets with Texas offers on both sides of the line of scrimmage.

The Longhorns must catch Oklahoma to eventually land Perkins, the No. 109-ranked player in the country, per 247Sports’ composite. He was high on the Longhorns all summer and Texas is still in the race, though trailing the Sooners. Perkins is a versatile end capable of playing multiple positions, something UT defensive coordinator Todd Orlando searches for in his linemen. Texas’ top in-state targets at end are Joseph Ossai and Texas A&M commit Max Wright.

Texas quickly moved into the lead for Antwine after he de-committed from Ole Miss. It’s a down-year in Texas for defensive tackles and the Longhorns likely need to leave the state to sign more than one player at the position. Monday’s commitment by Coburn makes Bobby Brown and Antwine the top remaining targets on the board at the position.

Texas will monitor Carson through his senior season. He’s one of several defensive ends that are still UT options in 2018, though Texas would need to make up ground and get him on campus for an official visit to stand a chance. Carson is another diverse end with the potential to play multiple spots in Orlando’s defensive scheme. His frame suggests he could eventually wind up as a defensive tackle as he adds weight.

It’s a weak year for offensive linemen in Texas, and especially weak at the guard and center positions. To land an elite interior lineman, Texas must focus its recruiting outside the state. There aren’t many better options in the country than Hill, who spoke highly of the Longhorns at The Opening Final. Like any major out-of-state recruit, earning an official visit likely decides if Texas is an actual player for Hill, who holds offers from nearly every major program in the nation. The only legitimate in-state option at guard is LSU pledge Chasen Hines.

Texas’ lone offensive line pledge is Reese Moore, a prep tight end set to transition to offensive tackle in college. The Longhorns also are targeting in-state lineman Rafiti Ghirmai, but they’re not the clear leader for the Frisco Wakeland product. That means Texas might need to find its second tackle outside the state and Angilau is a long-time favorite of the UT staff. He’s the No. 21-ranked tackle in the country.

The post The Longhorns have to explore beyond Texas borders for linemen appeared first on HookEm.