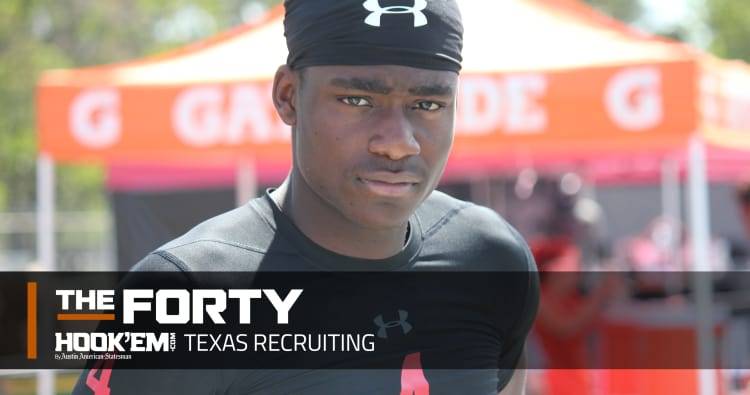 Eleven new names will appear on the updated 2018 Fabulous 55 , which will be released on Friday. The headliner is Texas commit DeMarvion Overshown, the Arp safety who goes from unranked to the top 15 on the new list. He’s joined by Yoakum’s Joshua Moore, who moved back to Texas after a short stint at Florida’s IMG Academy as the two newcomers to land in the top 20.

The camp circuit, also known as the T-Shirt Olympics, helps with rankings. It allows elite players who normally wouldn’t play each other on Friday nights to compete in limited competitive settings. Those settings aren’t always the best indicator for football talent, but to dismiss the camps is as unwise as relying solely on them.

Spring football and 7-on-7 also helped and hurt stock throughout the list.

Here are the 11 new faces on the updated Fabulous 55:

Moore’s omission from the original Fab 55 was due to his move to Florida. Now that the smooth route-running receiver is back at Yoakum, his inclusion into the updated list was a no-brainer. Moore caught 27 passes for 527 yards and eight touchdowns as a junior, adding four touchdowns on the ground and also starting at cornerback.

Ghirmai impressed throughout the camp circuit, routinely handling some of the best defensive line talent in the state at The Opening Regional and the Under Armour All-American Camp Series. His offer list is equally impressive with options like Texas, UCLA and Alabama. He’s two inches away from being the best offensive line prospect in the state; his lack of length means a transition to guard wouldn’t be out of the question at the college level.

Moore is an all-state tight end who excels on the basketball court. As a college tight end prospect, he lacks the athleticism to create space and become a threat in the passing game. As an offensive tackle, however, Moore’s athleticism and footwork becomes a plus instead of a minus. He’s tall, long and possesses room to add 30 pounds without losing lateral quickness. He’ll be transitioning to a new position against talents he doesn’t face in West Texas, but his upside is apparent.

Galvin is another tackle prospect with an ideal frame to match quality athleticism. The Baylor pledge moves well for his size and comes from one of the most recognizable high school football programs in the state. He’ll need to get stronger to earn snaps in college, which is true for 99 percent of high school offensive line prospects. Galvin was a quality pickup for Baylor and head coach Matt Rhule. Baylor is starting to make a dent on the Texas recruiting circle for the first time in a couple of cycles.

Barnes is another example of Rhule and Baylor striking instant success on the recruiting trail. Barnes, a track star, might be the fastest player in the state and should be an instant vertical threat at the collegiate level. He’s raw and needs to become a better route runner, but his athleticism is rare and should be a weapon for the Baylor offense for years to come.

Hanspard could easily end up playing cornerback with his combination of quickness and length. He also can play wide receiver where those same traits make him a playmaker in space. Hanspard is the type of athlete that college coaches get on campus and find a position for later. He’s that athletic and should find a permanent home for his skills once he’s at Arkansas.

Hobbs is Texas’ longest standing commitment for the 2018 class and flew under the radar following his junior season because he plays at a high school rarely known for producing wins or college talent. He showed flashes of his college potential at camps throughout the offseason. Hobbs is a long, lean outside linebacker prospect who can rush the passer, help in run support and in pass coverage.

Ossai is raw and still learning the game of football. He picked up the sport late in life and it took him some time to earn his way onto the varsity team at Oak Ridge. Once he started figuring out the defensive end position, Ossai quickly became a force. He’s one of the most athletic defensive linemen in the 2018 class and looked even stronger at Oak Ridge spring practice.

How many Texans could find Arp on an unmarked map of the state? It’s not a frequent stop for college coaches and it lives in the shadows of East Texas powerhouses like Carthage, Tyler John Tyler and Longview. But Overshown is a reason to make it to Arp. At his size, he could wind up playing in the secondary or at linebacker. He’s played both spots as well as defensive end in high school.

A recent Texas A&M commit who held 20 offers, White is an athletic outside linebacker with a safety’s speed and a linebacker’s size. He excels in the open field chasing down quarterbacks and ball carriers. He’s also one of the top coverage linebackers in the state. He’ll need to improve at the point of attack against SEC offenses and he possesses the frame to add that necessary muscle.

It’s a loaded year for cornerbacks in the state, and Green is one of the top players at the position. The Michigan pledge helped DeSoto win a Class 6A Division I state championship and earned an invitation to The Opening Final in Oregon over the summer. He’s tall, long and athletic. He’s not yet a technician at the position or overly athletic, but Michigan coach Jim Harbaugh believes in his upside; Green also held a Texas offer.

The post Eleven new names are set to appear on the updated Fabulous 55 appeared first on HookEm.

Texas comes in at No. 23 in Sports Illustrated preseason rankings