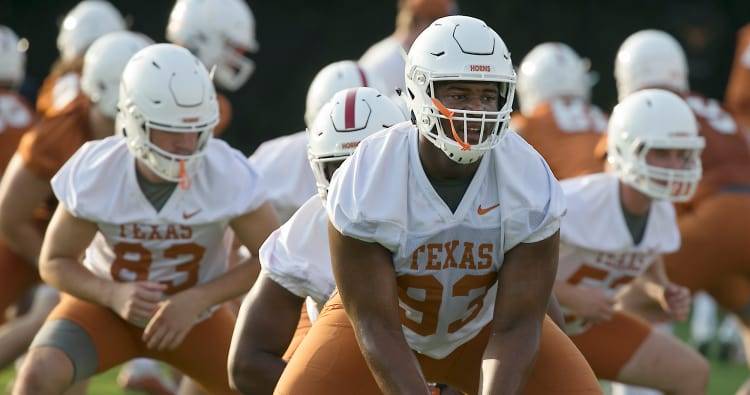 Since it returned to the practice fields, Texas’ defensive line has featured a few fresh faces.

Freshman Ta’Quon Graham has drawn rave reviews, and junior-college transfer Jamari Chisolm has inserted himself into the discussion regarding playing time. Additionally, Max Cummins was a member of UT’s 2017 recruiting class.

Tope Imade is also in the midst of a transition to the defensive line. A 6-6, 315-pound redshirt freshman out of Arlington, Imade signed with Texas in 2016 as a three-star offensive lineman. Imade competed as a guard this spring, but he switched to the other side of the football this summer.

“He got a lot of reps on Saturday. That is a big, good-looking dude that’s got some intelligence about him, got some twitch to him. I even wrote down on my notes today, just watching him run around, I think I wrote down something like ‘We’ve got to find a way to make Tope a player.’

We’re going to talk about that in our staff meeting. Now whether that happens this year, I mean he’s a redshirt freshman that played offensive line for an entire year and some change. But (I’m) happy with that move at this point. Now he’s got to do the things that we’re tasking him to do in order to develop as a defensive lineman, but I think the potential’s there.”

The addition of Imade gives Texas another option as the program attempts to offset the losses of  defensive tackles Jordan Elliott and Marcel Southall, who both transferred this summer. Elliott is currently at Missouri. After redshirting at Texas, Southall will spend this year at Tyler Junior College.