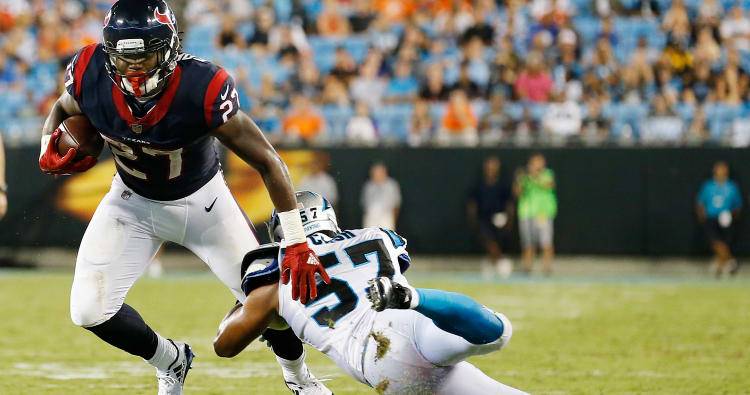 Foreman gained a few yards with a nice little hurdle on a run to the left.

His best play of the night came on a 41-yard rumble down the right sideline.

After showing up to minicamp a little out of shape and running into some legal trouble, he looked very much like the running back Longhorns fans were used to seeing Wednesday. He led the Texans with 76 yards rushing on just nine carries for an 8.4 yards-per-carry average. Foreman also added two catches for six yards.

Fozzy Whittaker was another former Texas running back in action on Thursday. He had two carries for ten yards for the Panthers.

Last Thursday Duke Thomas, a former defensive back at UT, played in the Hall of Fame game. He recorded two tackles in the Dallas Cowboys’ 20-18 win over the Arizona Cardinals.

Phil Dawson, who’s the new kicker for Arizona, sat out the game because that’s what 18-year veterans do.

Many more teams will be in action Thursday night, including the Vikings, Saints, Eagles and Patriots. Each of those teams has a former Longhorn defensive player making an impact. Brian Robison plays defensive end for Minnesota, Kenny Vaccaro is a safety on the Saints, Jordan Hicks plays linebacker for the Eagles while Malcom Brown holds down the defensive line for the Patriots.

The post Longhorns in the NFL: D’Onta Foreman shines in preseason appeared first on HookEm.