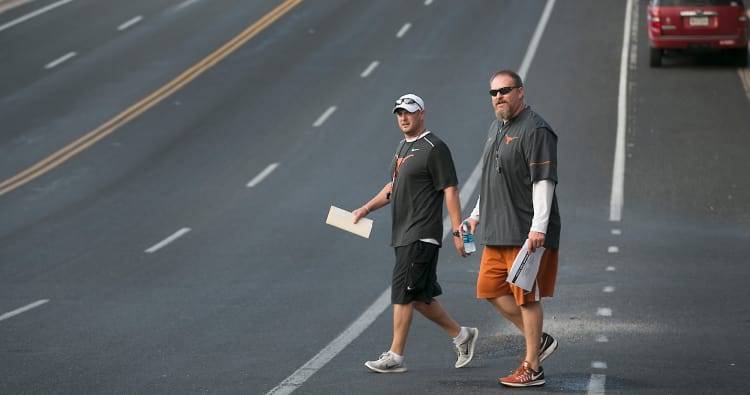 If Tom Herman knew why his recruiting sales pitch was so effective, “I’d bottle it up and sell it and work a lot less hours,” he said Wednesday.

Herman still hasn’t coached a single game with the Longhorns. He presides over a program that’s gone through three straight losing seasons. But just as he did at Houston, Herman is convincing recruits that UT has a bright future.

There’s no other way to explain this scorching hot streak the Longhorns are enjoying on the recruiting trail. This month alone, Texas has secured commitments from the state’s 13th-best defensive tackle, the nation’s No. 1-ranked junior college tight end and another four-star tight end from Houston.

Recruiting rankings can be iffy, but the fact is Texas currently has the nation’s No. 2-ranked recruiting class for 2018, according to 247Sports’ composite ratings of the industry’s top sites. The Longhorns have 17 commitments, including pledges from the state’s second-, third-, fourth-, fifth-, ninth-, 11th- and 13th-ranked overall players.

By NCAA rule, coaches are not allowed to talk about specific recruits until they sign a national letter of intent. But that doesn’t stop them from describing the big picture.

“I think you sell the people,” Herman said. “You sell our staff. You sell our strength coach, you see the academic staff, our nutritionists, our assistant coaches. The truth is easy to sell.

“You sell the tradition, although tradition for these guys is Vince Young,” the coach added. “It’s not Earl Campbell and Tommy Nobis. Tradition can only get you so far. You’ve got to sell the people, the academics, the city and you sell the track record, too. You sell the testimony of what we’ve done as a staff at the last place we were at.”

Driving home the point, Herman said, “I really do think if there’s one thing I’ve done right as a head football coach is hire great people.”

Herman, who went 22-4 in two years at Houston and 6-0 against ranked opponents, is selling a burnt-orange vision for the future. That includes a pro-style offense, one that averaged 35.8 points last season with the Cougars. He’s touting an attacking 3-4 defense, one that made then-freshman Ed Oliver a household name.

The school can now showcase a state-of-the-art locker room, the benefits of a $10-million upgrade. That’s part of the “alignment” Herman preaches about, from UT President Gregory L. Fenves to men’s athletic director Mike Perrin on down.

And if he’s really being honest, Herman is benefiting from the uncertain future at Texas A&M, where coach Kevin Sumlin faces a do-or-die season. Oklahoma’s future is also cloudy now that Bob Stoops has retired and turned things over to Lincoln Riley, a promising-yet-unproven head coach.

Texas is likely to sign around 22 recruits for 2018, although that number is a moving target based on a variety of factors. The NCAA has changed the recruiting calendar, and now players have a window to sign just before Christmas.

For those who want to wait, signing day is Feb. 7, 2018. Coaches will learn where their school stands based on who signs early and who waits.

“We’re going to wait on some guys, certainly, that are worth waiting on,” Herman said. “We’ll take that on a case-by-case basis. If you’ve got a plan A and plan B wants to say yes, and you’re not really confident with your chances with plan A, there’s a cost-benefit ratio to examine at that point. But there’s still a few plan As out there that we’re willing to wait awhile.”

No bell cow: Running backs coach Stan Drayton said the Longhorns do not have a bell cow in the backfield, someone who can be a go-to choice all game long. Herman agrees.

“I don’t know that they will in this group, and that’s OK,” Herman said. “You’d like it to be, but production comes in all shapes and sizes and all different kinds of forms and rotations.”

Herman said he views the position much like the defensive line. No one or two players will play the entire game. It’s likely that two or three running backs play “quite a bit during the course of a game,” he said. Drayton said he ultimately likes to go with the “hot foot” down the stretch.

Running back Kyle Porter was held back during Wednesday’s practice after having a slight shoulder problem.

Injury update: Herman said right tackle Elijah Rodriguez would see a foot specialist on Wednesday to determine the severity of his sprained ankle. Rodriguez’s availability going forward is still unknown. That opens a window for Tristan Nickelson or Denzel Okafor to impress the coaching staff.

The post Tom Herman is ‘selling the people’ as Longhorns enjoy a red-hot recruiting streak appeared first on HookEm.

Longhorns in the NFL: D’Onta Foreman shines in preseason