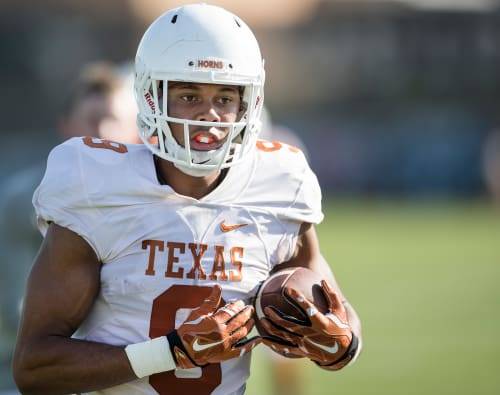 Of course, his Longhorns receivers look fantastic lined up out wide. Collin Johnson is 6-6. Dorian Leonard and Lil’Jordan Humphrey are both 6-5. Reggie Hemphill-Mapps glides through traffic and Devin Duvernay runs like a deer.

“I don’t think they played the game as necessary as it was to be an elite-level football team or an elite-level unit,” Mehringer said after Thursday’s practice. “And we can’t accept anything less than that.

“We have some guys that have some bad moments out of practice,” he added. Granted, that happens everywhere. But to be consistent, Mehringer said, “Are we going to play this game physically on the perimeter? We have to. If you’re going to go compete with the best, you’re not going to be doing it by avoiding contact in a physical sport.”

Mehringer, 29, is every bit the truth-teller that UT coach Tom Herman is. That’s probably why the two click. Mehringer has worked with Herman from his days as a student assistant Rice to Iowa State, Ohio State and Houston.

Last season, Mehringer was the offensive coordinator at Rutgers, where he was the youngest play-caller among the Power Five conferences.

Mehringer agrees that his receiving corps is the deepest unit on the team. He simply wants them to be more physical, like blocking on running plays or fighting to get open.

Take Johnson, for example. The sophomore had 28 catches for 315 yards and three touchdowns last season. He caught a 16-yard touchdown against Texas Tech in the first quarter. Then he ran the same route on the opposite side of the field for a 9-yard score.

“In the spring, I told him I didn’t think he had the physical toughness to play this position at an elite level,” Mehringer said. “He’s on a mission to prove me wrong.

“I said if I was that big, I would try to manhandle every human in my way, and he’s taken more of that approach,” he added. “I’ve been very, very excited to see. His ceiling is so high but he’s got to choose and I’ve got to coach him to get up there and reach that.”

Like other position coaches, Mehringer wants his receivers to learn both outside positions and the slot. Also like other assistants, he’s hesitant to label anyone a starter.

Hemphill-Mapps is a “super fluid route runner,” Mehringer said. “He’s growing up from the standpoint that he’s willing to throw his body in there more than he’s been. He’s not avoiding things.”

Duvernay’s got “great linear speed” and wants to be a more well-rounded player. Jerrod Heard, who no longer considers himself a quarterback, “looks at times like a receiver who’s been a receiver for only a year,” Mehringer said.

Armanti Foreman, now a senior, should also be motivated after watching his brother, D’Onta, sign with the Houston Texans. Fellow senior Lorenzo Joe also has plenty of experience having logged 32 career games.

The Longhorns had plenty of contributions from this group last season. Six different players had three touchdown catches.

“Those guys have markedly improved,” Mehringer said, “and they still have a way to go to become an elite level unit.”

Meekins said he recruited Leitao while coaching at Houston and has known the 6-4 tight end for almost two years.

“It’s not going to define him at the end of the day,” Meekins said. “That’s not who he is. He made a mistake. He’s proven it every day, and he has to prove it every day for the rest of his life or its BS.”

“I’m ready to see who he is, ready to see what he’s all about,” Warehime said. “The reality is if you’re going to get yourself into the depth chart, you’ve got to get in there and take those spots. You get only so many opportunities.”

Right tackle is really the only question mark on the offensive line now that Elijah Rodriguez could be out for a while with a sprained ankle.

Vahe on awards list: Junior left guard Patrick Vahe has been named to the watch list for the Polynesian College Football Player of the Year Award.

The award recognizes the top player of the year of Polynesian ancestry. Vahe has played in 22 career games at Texas, with 19 starts. Five finalists will be announced on Nov. 30 and the winner will be revealed on Dec. 14.

The post Collin Johnson, fellow Texas receivers are being challenged to be more physical appeared first on HookEm.