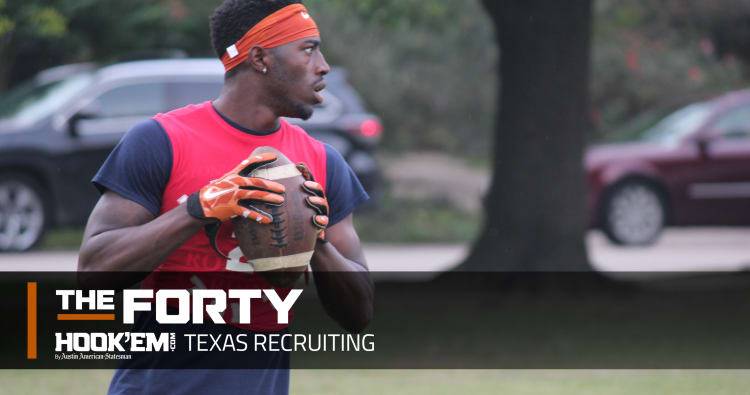 Texas is running out of room in the 2018 recruiting class. That’s a welcomed development for Tom Herman’s program. Texas’ new head coach is repairing the reputation of the program with elite recruits across the state and country, having built what is now the No. 2-ranked recruiting class in the nation.

Epps and Coburn were on the previous Next five up piece. Texas has 17 commitments and is expected to sign around 22 prospects, which leaves roughly five spots open in the class.

Here are six viable options to fill those spots:

Odds of signing with Texas: 85 percent

The versatile defensive back from DB High remains a top priority for the Longhorns. Texas wants two more cornerbacks to fill the class and it hopes one is Jamison, who showed off his unique set of skills at The Opening Final in Oregon over the summer. That raised his recruiting stock higher. Jamison doesn’t possess the length of some of the top-rated cornerbacks, but he makes as many plays because of his strength, football IQ and quickness. It’s down to Texas and TCU.

Texas made it clear it wouldn’t mind signing two defensive tackles when it extended an offer to Antwine, a former Ole Miss commit, knowing Coburn was likely to join the fold. Coburn is a different style of defensive tackle than Antwine, so the pairing makes sense. Antwine is a quick, athletic defensive tackle who could play multiple spots in Todd Orlando’s offense. Texas is in the lead.

Odds of signing with Texas: 75 percent

It took time for the Longhorns to offer Bush, but it doesn’t appear that’s hurting their chances to land the long, athletic receiver from San Antonio. Bush joined UT receiver commits Rondale Moore, Al’vonte Woodard and Brennan Eagles in Oregon for The Opening Final. An eventual pledge from Bush would give Texas a talented and diverse group of wide receivers for the 2018 class.

Cook is a consensus five-star talent who ranks as the No. 2 cornerback in the nation. Texas recently made his final three along with Ohio State and Clemson, but most feel it’s a two-team race between the Buckeyes and the Longhorns. Texas’ advantage might be Cook’s teammates — Woodard is already committed to the Longhorns and Jamison is predicted to join the fold in the fall.

Texas joined the race for Ghirmai early in the process. The four-star is arguably the top tackle prospect in the state and never looked overwhelmed against the best defensive linemen at The Opening regional and Under Armour All-American Series. Texas faces serious competition from UCLA and the Bruins are a coin-flip to land Ghirmai.

Hines is a powerhouse of an offensive lineman suited to play guard in college. He’s a bull of a prospect and committed to LSU in March. That doesn’t mean Texas has stopped recruiting him, especially as the Longhorns struggle to find suitable options for interior linemen in 2018. The Longhorns’ 2018 pledges have been vocal toward Hines on Twitter about joining the class, which could be a sign of forthcoming good news.

The post Next five up: Who could help finish Texas’ 2018 recruiting class? appeared first on HookEm.