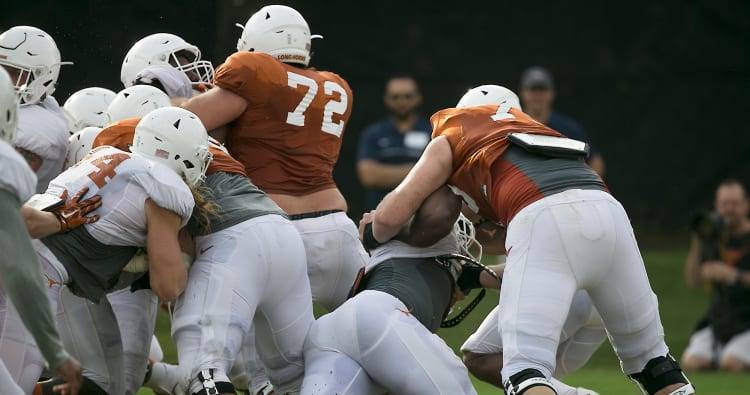 Texas right tackle Elijah Rodriguez underwent successful surgery on his injured right ankle on Thursday and will be out for an extended period, the school announced.

Rodriguez suffered the injury during Tuesday’s practice when it appeared linebacker Anthony Wheeler was accidentally blocked down onto the back of his leg. The 6-foot-6, 300-pound junior could not put any weight on his leg and had to be helped off the field. There is no timeline for his return, the school said in a statement.

Rodriguez was on track to become the starter, effectively winning what morphed into a three-man battle for the only open position on the offensive line. Now, senior Tristan Nickelson and sophomore Denzel Okafor will get their chance to win the job.

On Thursday, UT offensive line coach Derek Warehime said he challenged Okafor (6-4, 310) to step up his effort and intensity.

“I’m ready to see who he is, ready to see what he’s all about,” Warehime said. “The reality is if you’re going to get yourself into the depth chart, you’ve got to get in there and take those spots. You get only so many opportunities.”

“I trust Tristan, I do,” Warehime said. “He knows what to do, he’s going to do it to the best of his ability and he’s going to strain through the echo of the whistle.”