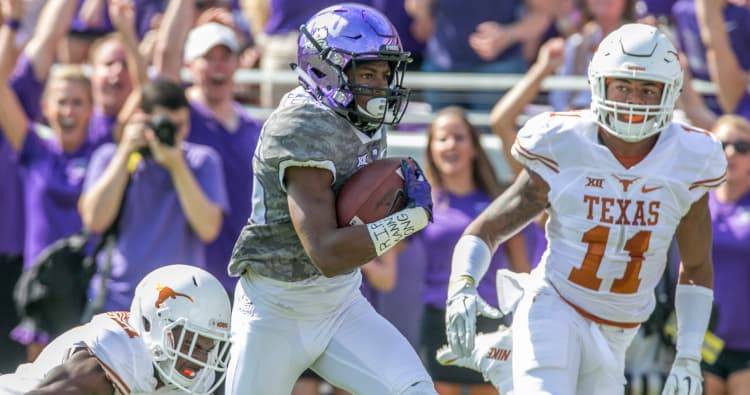 Sure, TCU’s hopes rest on the arm of Kenny Hill, but Hill’s job will get a lot easier with a healthy KaVontae Turpin. After a breakout freshman campaign in 2015, Turpin’s production dropped off dramatically last season. Injuries kept him out of five games and limited him to 30 catches for 295 yards — less than half of what he had as a freshman. Still, he managed the second-most all-purpose yards on the team thanks to his prowess as a return man, a skill set that landed him on the All-Big 12 preseason team.

Turpin also gave Horned Frogs fans a scare this spring when “academic issues” kept him from practicing, but coach Gary Patterson abated those fears at Big 12 media days. The runway finally appears clear, and Turpin remains one of the most electrifying talents in the Big 12, if not all of college football.

Kicking to Turpin is almost always a bad idea. Just ask Arkansas. The 5-foot-9, 153-pound Louisiana native averaged 28.4 yards on kick returns and 12.5 yards returning punts. He had an 81-yard punt return touchdown against South Dakota State, and his 64-yard return against Arkansas very nearly won that game. On offense, he’s a dynamic weapon who has to be accounted for.

Turpin didn’t play when the Horned Frogs came to Austin last season, but he did plenty of damage in 2015. The four touchdowns he scored that day are still a career high, and his six catches for 138 yards marked the first time in his career he went over the century mark. The freshman had his prints all over TCU’s 50-7 blowout victory.

The post Top opponents for Texas in 2017, No. 23: TCU WR KaVontae Turpin appeared first on HookEm.

Next five up: Who could help finish Texas’ 2018 recruiting class?