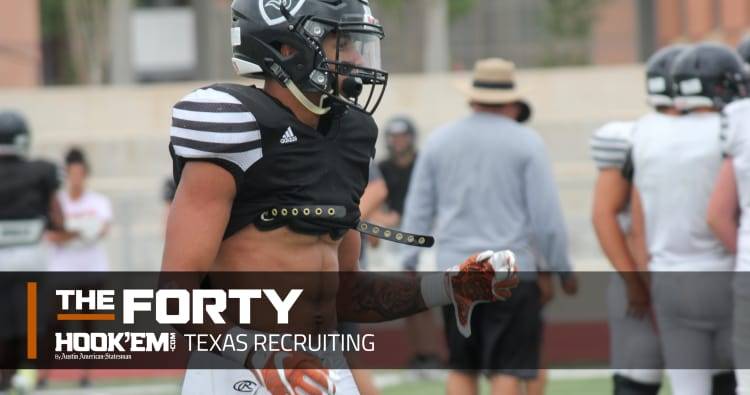 The updated Fabulous 55, our annual list that ranks the state’s top 55 players, is set to release Friday and Longhorns fans will recognize 10 of the names. Tom Herman’s program leads all teams with 10 commitments so far on the list. The only in-state UT pledge not to make the list is Lake Travis kicker Cameron Dicker.

Texas A&M is second with nine pledges. Baylor (4) is the only other program with more than two on the updated list.

Seven of the 10 Texas commitments were in the original Fabulous 55, including top 10 players like B.J. Foster, Caden Sterns and Jalen Green. Recent commits like Brennan Eagles, Keondre Coburn and DeMarvion Overshown are also in the running for top 10 spots on the new Fab 55.

Before revealing the new rankings, let’s take a closer look at why the 10 UT pledges deserve Fab 55 honors.

Foster — Texas’ lone five-star commitment — is a physical freak of a safety prospect when he’s healthy. He played in only five games his junior year and also missed some time during his freshman season. Foster is asked to play both offense and defense at Angleton, making it easier to sustain an injury while splitting time at running back and safety. He returned from his injury at The Opening Final in Oregon earlier this summer and showed his elite athleticism as well as understandable rust. But when he’s healthy, he’s arguably the top athlete in the state.

Sterns comes from good stock. His older brother Jordan was an all-conference performer at Oklahoma State and is currently attempting to make the roster of the Kansas City Chiefs. Caden is predicted to be better than his older brother, who exited high school as a three-star recruit. A one-time LSU pledge, Sterns flipped to Texas in May after making an unofficial visit. His performance at The Opening Final raised eyes around the country because of his ability to play safety and cornerback.

No player in the state looks better at camp competitions than Green. His length, raw strength and athleticism allow him to overwhelm smaller receivers and hold his own against the big receivers around the country. Green recorded six interceptions in one day during 7-on-7 pool play at The Opening. The former quarterback is viewed by many college coaches as the top defensive back prospect in Texas with the highest potential upside. That’s a big compliment in a year loaded with talent at safety and cornerback.

Coburn is the best defensive tackle in the state and the newest addition to the 2018 class list. He’s big and strong enough force double-teams and athletic enough to make plays behind the line of scrimmage. Coburn carries a lot of weight, but he does so without losing a step or taking many plays off, which is rare for tackles at the prep level. His lack of height allows him great leverage and it’s rare to see him pushed off the point of attack. In a down year for defensive tackles within the state, Coburn was a major grab for Herman’s staff.

Glad to finally be in the picture 🤘

There’s not a wide receiver in Texas with a better combination of size, speed and skill than Eagles. He’s one of three receiver commitments for the Longhorns and all three showcased at The Opening in Oregon. Eagles was the standout of the group, using his size to bully cornerbacks and his speed to win vertically against safety help. He also showed a penchant for making one-handed highlight catches. He’s firmly in the discussion for distinction as the state’s top receiver.

Woodard is another UT commit in the discussion for being the state’s top prospect at wide receiver. He lacks the height of Eagles and the power of Texas A&M commit Jalen Preston, but he’s an all-around receiver who might be the best vertical threat in the state. He was solid at The Opening Final. He’ll need to break his habit letting passes get into his chest. Woodard can play outside receiver or move into the slot, a versatility offensive coordinator Tim Beck likes.

Ingram is a three-down back who led his program to a state championship last year. He’s equally effective as a rusher or a pass catcher and he improves as he gets more carries. Carthage is one of the few high school teams left to rely heavily on a single-feature running back and Ingram will finish his career as one of the most productive rushers in school history. He’s shown the ability to carry the ball 20-plus times a game and put up wide receiver numbers out of the backfield.

Overshown is an interesting prospect. He’s a big safety prospect who spent time early in his high school career as a defensive end. He also played linebacker before finding a home at safety. It’s unclear whether safety will remain Overshown’s home once he arrives on campus, though. The trio of Overshown, Foster and Sterns gives Texas the country’s best secondary class of the 2018 cycle. Overshown is a big, physical player with surprising speed for his size. His talent isn’t up for debate, even if his future college position isn’t set in stone.

Texas is counting on Moore’s potential. As a prep athlete, he’s an all-state tight end and an all-district basketball player. He’s an athletic big man who the Longhorns hope can make the transition from high school tight end to college offensive tackle. Moore is long enough to excel at offensive line and his frame should easily allow another 30 pounds to be added with a redshirt season.

Hobbs flew somewhat under the radar as a junior. His combination of length and athleticism earned him college attention toward the end of the year and scholarship offers eventually followed. He’s Texas’ longest-standing commitment and should play Rover linebacker once he arrives on campus. His raw athleticism and frame set him apart from most high school prospects. Hobbs excels rushing the passer, in run-support and in coverage.

The post Longhorns lead the way with 10 commits on our updated Fabulous 55 appeared first on HookEm.