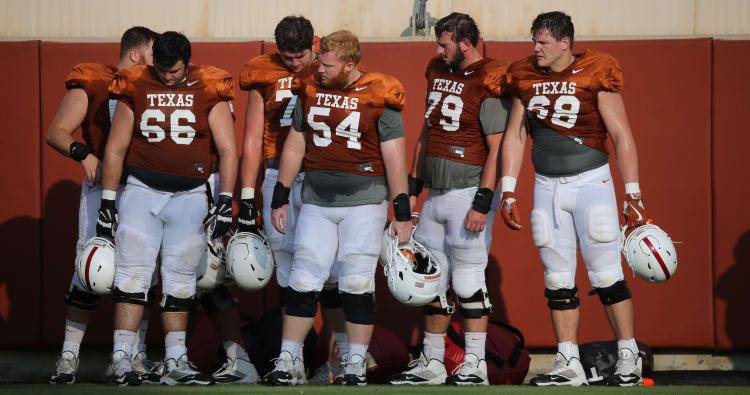 At 11 letters, versatility is a big enough word for Texas’ offensive line. That unit, after all, will probably use five 300-pound starters when the season kicks off Sept. 2.

Texas coaches have recently been preaching that their linemen need to fill multiple roles. As an example, head coach Tom Herman said last week that in the wake of junior Elijah Rodriguez’s emergence at right tackle, the other candidates for that job were getting reps at left tackle.

A few days later, Rodriguez was injured when a teammate rolled up on his right ankle during a practice. Texas announced Thursday night that the 6-foot-6, 300-pound Rodriguez had successful surgery on the ankle. No timetable was set for his return.

Senior Tristan Nickelson and sophomore Denzel Okafor seem like obvious choices to replace Rodriguez, since they were once considered the front-runners for the starting gig. Perhaps, though, a dark horse will emerge. As offensive line coach Derek Warehime told reporters Thursday, the line’s depth chart needed to be all-encompassing, not position-by-position.

“At some point this season, somebody’s helmet is going to come off, somebody’s shoelace is going to break, something’s going to happen to where a guy’s got to come out,” Warehime said. “We’ve got to jog a guy into the game. We’re going to jog the sixth-best guy into the game, regardless of he’s tackle, he’s guard, he’s center. No, he’s the sixth-best guy, so that guy’s got to be ready to play all five positions and go in there and execute.”

According to Warehime, UT will train its linemen at multiple positions. He expects his players to know the entire blocking scheme. Warehime said he “learned my lesson” about versatility and depth two years ago at Houston.

During a 49-28 win over SMU that season, two of the Cougars’ starting linemen suffer season-ending injuries. Warehime recalled eating a postgame meal of ribs alongside defensive line coach Oscar Giles, who now holds the same position at Texas. Warehime asked Giles if he had any lineman to spare, and freshman defensive tackle Kameron Eloph was starting at right guard three weeks later.

“I was sweating bullets going into that game,” Warehime said. Eloph ended up starting eight times during Warehime’s two years with the Cougars.

Warehime probably won’t need to bother Giles this season. (In fact, Texas recently turned offensive lineman Tope Imade into a defensive tackle). Texas enters this season with seven offensive linemen who have started a game at the college level.

Some of UT’s linemen have already showcased the versatility Warehime is seeking. Rodriguez and junior Jake McMillon both started at three positions last season. Freshman Derek Kerstetter, who was recruited out of San Antonio Reagan as an interior lineman, worked a bit at right tackle this week.

Warehime said UT would like a minimum of eight linemen available on any given Saturday. Nine would be a bonus. Warehime wasn’t ready to list Texas’ eight or nine best linemen this week, but he noted that the Longhorns were beginning to separate themselves.