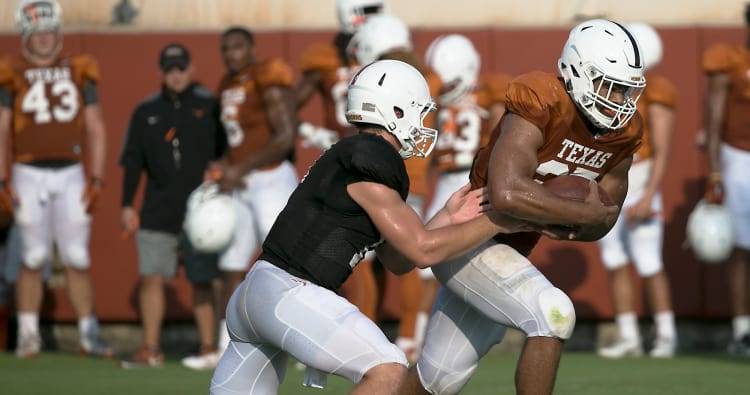 Coach Tom Herman said the 250-pound junior suffered a concussion during Thursday’s practice and was being evaluated. The UT medical staff takes a hard-line stance on concussions, so it’s unclear when Warren will be cleared to resume full contact.

“Yeah, he was having a good camp,” Herman said of Warren after Saturday’s scrimmage. “I never know the differences in those deals, but he’s alert and he’s in the protocol. If he’s still out this time next week, yeah, that would be concerning. But right now, I’m not too concerned. Those are some of the things that happen during training camp.”

So now, Warren’s out and sophomore Kyle Porter is working through a sprained shoulder. That’s in addition to Kirk Johnson getting off to a slow start with a hamstring problem.

“Our two true freshmen that we were going to count on, they had a rough go of it this morning,” Herman said. “They both got called out of stretch to start the day off, and that’s never a good thing. They’ve got to mature and mature quickly, because we’re going to need them.”

Defense now 2-0: The running backs were front and center for the day’s biggest play, too. The offense had a five-point lead in Herman’s intrasquad scoring system. But the defense registered a sack and stopped the offense on third down to tie things up, he said.

Safety DeShon Elliott made the scrimmage-winning play at the goal line to give the UT defense the win. Herman did not say who got stopped.

For those scoring at home, the defense is now 2-0 over the offense in consecutive Saturday scrimmages.

Worries at TE: Herman said the depth at tight end is still a question mark. “What are we going to do there if Andrew (Beck) breaks a shoe lace?,” he said.

Junior Garrett Gray is the only other tight end on the roster with UT experience. But he’s missed time at practice to attend summer school.

Other injuries: Herman said offensive lineman Patrick Hudson and cornerback Davante Davis both left Saturday’s scrimmage early due to hydration issues. The temperature has hovered around the 100-degree mark all week long. Safety Brandon Jones was also held out Saturday due to a strained neck.

Briefly: The Longhorns will take Sunday off and then practice at Whitaker Fields next week for the final six practices of training camp. “By the next scrimmage on Saturday,” Herman said, “we should know a lot about our team and there’ll be a lot of things whether you like it or not, that’s who we are.”

With trip to Australia, Longhorns getting early start on upcoming season