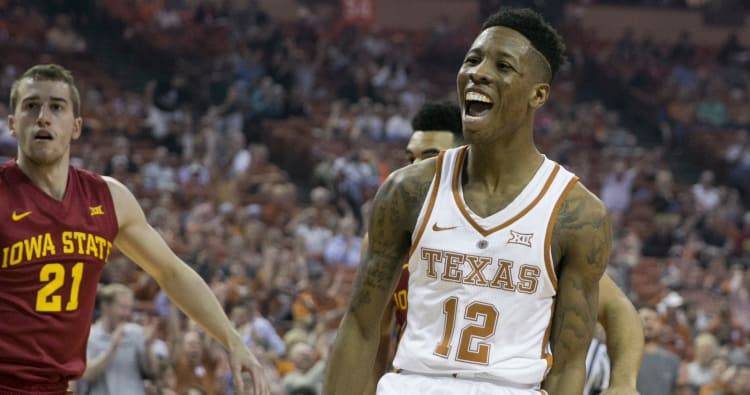 As someone who wants to play professional basketball someday, Andrew Jones is eager to test himself against grown men who already do.

The Texas sophomore knows this week’s four-game journey through Australia won’t be easy. In fact, it might be more difficult than anything the Big 12 can offer. But these four exhibition games, which all begin at 4 a.m. Central time, might be just the measuring stick the Longhorns need at the moment.

“They’re going to be more organized, and they’re not going to play around with us. They’re playing for checks,” Jones said. “I wouldn’t say it’ll give us an advantage, but it will be a great test for what’s to come.”

The Longhorns were scheduled to leave Austin on Saturday, cross the international date line and arrive in Melbourne, Australia, on Monday. The most intriguing game could be Wednesday’s matchup against Melbourne United, a team that will travel stateside this fall to play some NBA preseason games.

After 10 rugged practices in Cooley Pavilion, the Longhorns are itching to see how their new personnel will work against someone in another jersey.

“I wanted to give our guys an experience where they’re playing against guys who have maybe done more and seen more than they have,” coach Shaka Smart said. “I think we’ll get some good experience from that.”

Coach Smart has a message for YOU! #HookEm #HornsDownUnder pic.twitter.com/NOMC6BAcPk

How much better have Jones, Kerwin Roach Jr. and Eric Davis Jr. gotten since the end of their rocky 11-22 season in March?

How will freshman Matt Coleman handle the offense at point guard? Can fellow freshmen Jase Febres, Royce Hamm and Jericho Sims integrate themselves into Smart’s system?

How will five-star center Mo Bamba handle things when stronger athletes push back?

Smart believes this team has more athleticism, perhaps giving him the green light to implement more full- and half-court pressing. Can this team’s defensive hustle in practice translate to the court?

“I don’t think just winning four games is success,” Coleman said. “As a team, building chemistry on and off the court, learning from our mistakes and putting what we do in practice into the game, making it real, I think that would be success.

“If all those things fall into place, I’m sure we will win,” he added. “But if we compete at a high level, that would just be the appetizer coming into the fall.”

Bamba echoed Coleman. This trip is all about developing chemistry, he said.

“If we go 4-0 and we all come back and hate each other, then we didn’t really get the job done,” Bamba said. “If we go 0-4 and we’re tight and closer than we are now, then we’re making strides.”

Looking back at last season, chemistry wasn’t an issue. The Horns lacked a sure-fire ball-handler at the point and missed too many shots. They ranked last in the Big 12 in scoring (67.1), ninth in shooting (.439) and last in 3-point shooting (.292).

Asked if his team has any shooters now, Smart said, “Depends on the day.”

Roach shot 45.3 percent as a freshman but 39.9 percent as a sophomore. Davis shot 37.4 percent his first season and 32.5 percent his second. The coaching staff is trying to do everything possible to help them make substantial progress as juniors.

By all accounts, Roach is thriving with the move back to shooting guard, his natural position.

“Snoop’s been really good,” Smart said, calling Roach by his nickname. “The biggest difference has been his humility level. I think he’s learned a lot.”

As for Davis, Smart said, “We’re trying to build Eric back to the arrogance level he had as a freshman.”

Bamba is a completely different frontcourt player from Jarrett Allen, who now toils for the Brooklyn Nets. Bamba has a legitimate outside shot and recently made 71 of 100 3-pointers in practice. Bamba and junior Dylan Osetkowski, who sat out last season after transferring from Tulane, give the Horns a totally different feel from what Allen and Shaq Cleare did.

Osetkowski could become a UT fan favorite this season. The all-around hustle machine is growing out his hair and beard, giving him a slight wolfman look.

Smart said the coaching staff is “trying to get him to understand that he can, if he wants to, he can be the toughest, meanest, baddest dude on the court.”

Said Osetkowski, “Coach Smart has been very adamant with me about just being a dog, someone who doesn’t care what people think of me. I don’t care what people perceive of me or whatever. Just a guy who’s going to be talking smack, playing hard, playing smart, being that sort of person who gets everybody else going.”

The roster looks and feels totally different, as you’d expect after Smart reeled in the nation’s sixth-best recruiting class. Internally, this program expects to make a head-snapping turnaround this season.

That’s why a long international trip could be so beneficial. It’s a chance for coaches and players to be together outside of the UT bubble. Win or lose in Australia, the coaches believe it’ll be a terrific jump-start on the upcoming season.

The NCAA allows these types of trips only once every four years. Texas hasn’t done anything like this since Tom Penders took the Horns to Australia in 1996. The team’s trip to China for the 2015-16 season opener against Washington didn’t count since it was a regular-season game.

“The games are very, very important, but they don’t count on your record,” Smart said. “You can experiment with things and play some different lineups. The team-building aspect of it will be really, really good.”

The post With trip to Australia, Longhorns getting early start on upcoming season appeared first on HookEm.