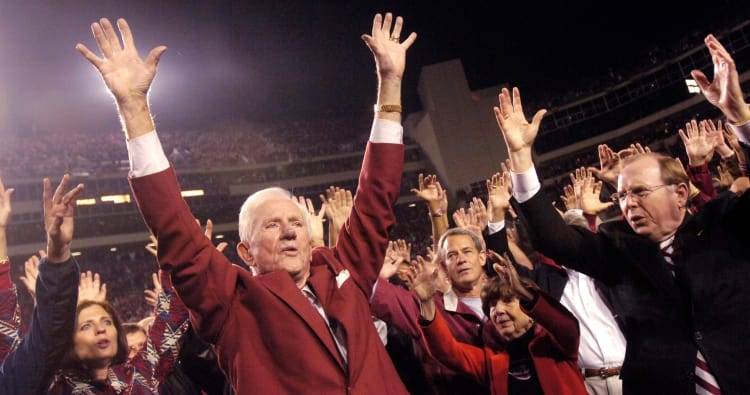 DeLoss Dodds and Frank Broyles both presided over mighty athletic departments that made life hell for each other in the Southwest Conference. But the Texas and Arkansas athletic directors were close friends off the field, too.

Broyles died Monday at the age of 92 from complications of Alzheimer’s disease, according to a statement from his family. His longtime UT counterpart was wistful on Monday upon hearing the news.

“He was in the conference when I came in and I loved him,” Dodds told the American-Statesman. “He was colorful, strong, cared about all the right things, just a wonderful human being. I loved the relationship he had with coach (Darrell) Royal.”

BOHLS: His coaching and foresight made Arkansas’ Frank Broyles a giant on the field

Broyles won almost 71 percent of his games as head football coach with the Razorbacks for 19 years. He became the school’s athletic director in 1974 while still the football coach, eventually retiring from the gridiron to focus on administrative duties following the 1976 season.

As athletic director, Broyles led an overhaul and upgrade of Arkansas’ facilities — as well as leading the school in its move to the Southeastern Conference. Following his coaching career, Broyles — who earned a spot in the National Football Foundation’s College Hall of Fame — served as an analyst on ABC’s college football telecasts.

While his coaching record of 144-48-5 defined the first part of his career, Broyles’ legacy at Arkansas is every bit equaled by his work as athletic director.

Asked if Broyles ever privately regretted leaving the SWC, Dodds said it may have been harder on Arkansas than some realized.

“I think it was hard for them, and it’s always hard when you lose competition that’s become serious, like Arkansas-Texas,” Dodds said. “That was serious competition in every sport. It’s hard to lose that and pick up new things, and I don’t know that they have picked those things up yet.

“Same would be true with (Texas) A&M,” Dodds added. “When you leave and you’re leaving 75 years of tradition, it’s just hard to reestablish things that like.”

Broyles was known for his ability to identify top coaches, both head coaches and assistants.

He was responsible for the hiring of basketball coaches Eddie Sutton and Nolan Richardson as well as Lou Holtz and Ken Hatfield in football. Broyles also hired former great John McDonnell in track.

Broyles retired as athletic director in 2007, moving into a fundraising role with the school’s Razorback Foundation until his retirement from that role in 2014.

“For the past 56 years, I have had the privilege or working in the only job I ever wanted — to be the head football coach and then the athletic director of the Razorbacks,” Broyles said at the time. “The Razorbacks have always been my passion.”

He spent much of his time later in life attending various Arkansas sporting events and raising money for Alzheimer’s awareness after the 2004 death of his wife, Barbara, following a battle with the disease.

He started the Frank and Barbara Broyles Foundation CareGivers United, an Alzheimer’s education organization, and wrote a book that published more than 800,000 copies and focused on helping those who care for loved ones with Alzheimer’s.

“In 50 years, people are going to look back and that’s what they are going to remember him for, his second legacy,” said Broyles’ daughter, Betsy Arnold.

Under Broyles as coach, the Razorbacks won or shared seven Southwest Conference football titles and went to 10 bowl games.

That included a win over Nebraska in the Cotton Bowl following the 1964 regular season, which left the Razorbacks 11-0. Alabama was also undefeated entering the bowl season and was named the national champion by The Associated Press poll, but the Crimson Tide lost its bowl game to Texas — leading to Arkansas being named the champion by the Football Writers Association of America.

“He’s a life teacher,” Jones told The Associated Press in 2014. “He always spoke about football as it related to life … All things pointed to life’s lessons.”