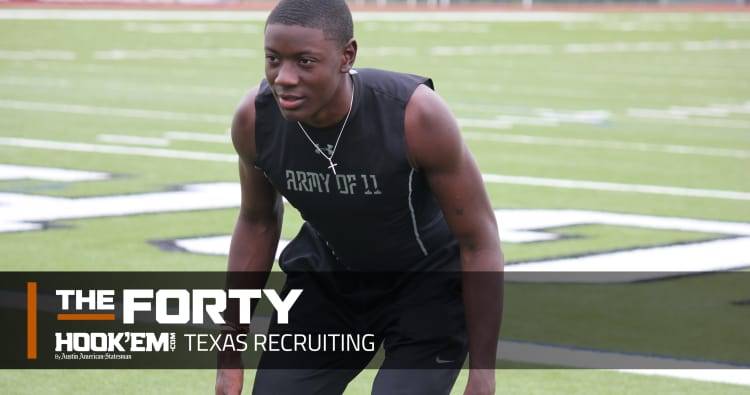 Byron Hobbs wasn’t the first Texas commitment of the 2018 cycle. But the Fort Worth Eastern Hills standout is the program’s longest-standing pledge of the class following a de-commitment from wide receiver Justin Watkins in June. Hobbs is an outside linebacker with three star-status who ranks No. 37 on the updated Fabulous 55.

Hobbs is one of Texas’ 17 pledges for a class that’s ranked No. 2 in the country, trailing only Ohio State. Hobbs committed on April 7. The 6-3, 205-pound prospect ranks as the No. 24 outside linebacker in the country and the No. 342-ranked overall prospect in the nation, per 247Sports’ composite.

He recently joined me on the phone to answer 10 questions.

At four when I was playing flag football. If you pulled my flag, we had to fight.

Texas made me feel at home. I loved the atmosphere at Texas and it isn’t too far from home. And who doesn’t want to play for Tom Herman?

I want to be a leader for my team and help carry us to the playoffs for the first time in years.

The loyalty from the coaches and the coach’s record, as well if the school could help me be successful after I graduate and football is over.

Off the rip, he has a grill and I don’t know of another coach with a grill.

My position will be Rover linebacker, where Malik Jefferson plays right now.

“Don’t Be a Menace to South Central While Drinking Your Juice in the Hood.”

Track. I could watch track all day.

Top opponents for Texas in 2017, No. 19: USC TE Daniel Imatorbhebhe