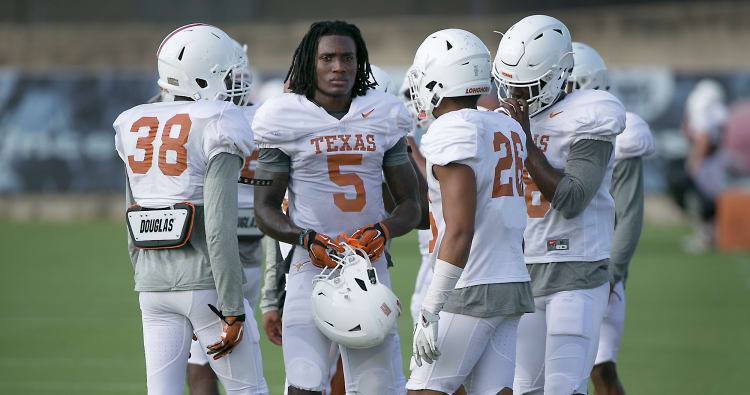 Texas assistant coach Jason Washington wants his cornerbacks to prepare for their moment.

For Kris Boyd, that moment was last year’s game-sealing interception against Texas Tech. Holton Hill has had a few moments over his 11 starts. What, however, about the cornerbacks besides Boyd and Hill, the expected starters on UT’s depth chart?

Tom Herman has said cornerback won’t be a rotating position, but depth at the position has still been a talking point during fall camp. And that was before Davante Davis (hydration issues), Josh Thompson (lower leg strain) and John Bonney (knee) appeared on last week’s injury report. All three players, Herman said, practiced at Whitaker Fields on Monday.

Texas does not have a senior on its defensive islands, and only three of the cornerbacks have intercepted a pass in their careers. Washington, though, didn’t seem concerned last week while discussing the depth chart.

So, which Longhorns are preparing for their moments? Here’s a look at the depth chart behind Boyd and Hill:

Davante Davis: The junior has nine career starts and earned an honorable mention nod on the Big 12’s 2015 all-conference team. Herman said Davis needed to earn the trust of the coaching staff and be more consistent, but “you know he’s physically able to do it.” Washington noted on Friday that Davis had gotten some practice reps with UT’s first string.

John Bonney: Labeled by defensive coordinator Todd Orlando as a “wild card,” the junior could fill a couple of holes on the depth chart. He’s made 13 starts at cornerback, but Texas moved him to safety this spring. Bonney, who broke up nine passes last year, has split time with both position groups during this month’s practices.

Josh Thompson: Thompson, who signed this year from Nacogdoches, is among the freshmen that Herman expects will play this season, and junior safety DeShon Elliott lauded the four-star recruit as a “freakish athlete, footwork is crazy and he listens.” Thompson, though, is raw. “He’s just trying to keep his head above water right now as a freshman, but we need to accelerate his growth process, too,” Herman said.

Washington added that redshirt freshmen Donovan Duvernay, the twin brother of sophomore receiver Devin, has made significant strides with his technique. Eric Cuffee could also receive some reps.

Practice notes: On Monday, Herman said that defensive tackle Poona Ford and freshman quarterback Sam Ehlinger were the MVPs of last Saturday’s scrimmage. … Safety Jason Hall and running back Chris Warren III, both of whom have suffered concussions during fall practice, practiced on Monday. Warren was not yet cleared to participate in contact drills. … Herman said he would like to see more out of defensive lineman Chris Daniels and receiver John Burt as the team attempts to solidify its depth chart. Since classes have not yet started, Texas is lacking for walk-ons and will likely open the season using a scout team with scholarship players on it.

The post Texas attempts to build depth at cornerback as season approaches appeared first on HookEm.