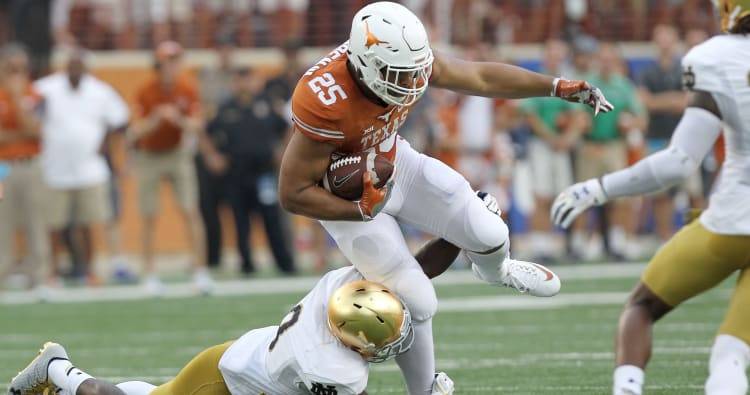 Breathe easy, Texas fans. Running back Chris Warren III was back at practice on Tuesday and went through a full-padded workout.

Warren’s health will be an ongoing issue. The junior suffered a concussion last Thursday and was held out of Saturday’s scrimmage as a precaution. He has not been made available to reporters since training camp began.

Warren and safety Jason Hall have both suffered concussions this month. The UT medical staff takes head injuries seriously and will not clear a player to return unless they can successfully complete the full protocol.

The Longhorns wear state-of-the-art helmets with sensors that can detect how much force is delivered on a given play. If a certain threshold is reached, trainers are alerted for them to check on an individual.

With long-term brain damage from repeated hits now under national scrutiny, the Longhorns are doing whatever possible to protect their players.

“I think it’s an injury that’s definitely diagnosed more across the country than five-to-10 years ago,” Texas coach Tom Herman said. “There’s no question about it, and for good reason. We’ve got so much more information about those kinds of injuries and what to do to treat them. I’m happy for our student-athletes that they’re being diagnosed more accurately.”

Delance announces transfer: Backup offensive lineman Jean Delance announced Tuesday that he’s transferring out of the program. His announcement on Twitter stated that Texas has given him his release.

“I’ve been praying over this decision and am thankful for all Coach Herman and this staff have done for me as a player and man,” Delance tweeted. “… I have ultimately decided transferring is the best decision for me to pursue a fresh start at another school.”

Delance, a sophomore, has been working out at both right and left tackle during camp. He saw action in two games last season, as a backup.

No worries, coach: Receivers coach Drew Mehringer said last week that he didn’t think Collin Johnson was physical enough out wide during the spring. For Mehringer to say that publicly meant that he’d been telling that to Johnson’s face multiple times before.

“I’m not scared of a challenge, personally,” the 6-6 Johnson said. “I don’t want someone to lie to me. If that’s how he feels, so be it. I would like him to tell me how he feels so I can improve as a player, because that’s what it’s about each and every day.”

Looking for Wheeler: One player flying under the radar this month is middle linebacker Anthony Wheeler. That may not necessarily be a good thing, though.

As the quarterback of the defense, it’s Wheeler’s job to make sure everyone is lined up correctly and to call out the defensive signals. It’s not a job for the timid. “If something went wrong, we’re looking at that position to step in and calm everybody down or rev everybody up,” defensive coordinator Todd Orlando said.

Wheeler has averaged about 4.4 tackles in 23 career games. He was actually the team’s leading tackler last season with 65 stops, not Breckyn Hager (64) or Malik Jefferson (62).

“We all make plays,” Wheeler said. “We all try to contribute as a team, so we can all play as one whole defense and not just one person.”

Quote of the day: Johnson had high praise for fellow receiver Reggie Hemphill-Mapps. “He can just roll out of bed and play football.”