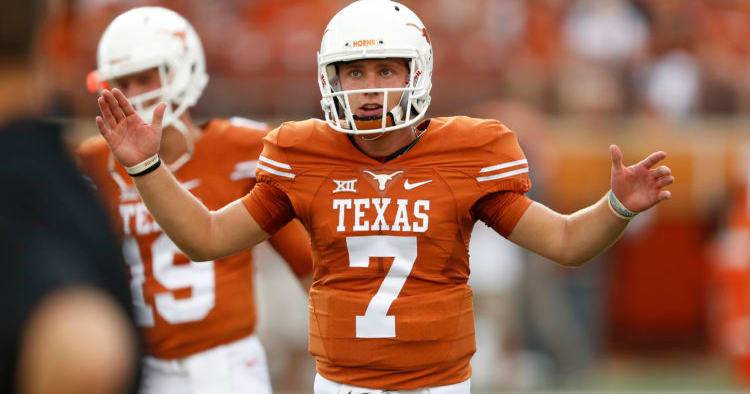 1. Texas 50, Notre Dame 47. In his first college game, Buechele connected with John Burt for a 72-yard touchdown play down the sideline. It was the fourth-longest touchdown pass thrown by a true freshman in school history.

2. Then there were the Buechele-to-Devin Duvernay fireworks against Iowa State and Kansas State. His 75-yarder against the Cyclones broke that 72-yard mark for fourth place on UT’s freshman list, then an 80-yarder to Duvernay against Kansas State became the third-longest freshman touchdown pass.

3. From a pure numbers standpoint, there was the West Virginia game. He was 31 of 48 for a career-high 318 yards against the 11th-ranked Mountaineers.

Texas’ starting quarterback was a four-star prospect who ranked as the No. 4 dual-threat quarterback in the nation and the No. 197 overall prospect in the country, per 247Sports’ composite. Buechele was the No. 15-ranked player on the 2016 Fabulous 55 and was the state’s top-rated quarterback on the list.

Buechele finished his prep career with more than 6,000 yards through the air, adding 1,741 yards and 19 rushing touchdowns throughout this three years. He committed to the Longhorns early (February 2015) and chose Texas over Oklahoma, Texas Tech and Houston. He was recruited both by Jay Norvell and Shawn Watson.

WHO BUECHELE HAS BEEN HERE — SO FAR

Buechele became a day-one starter after enrolling early. He set a school-record for a freshman with 2,958 yards and 21 passing touchdowns, passing Colt McCoy. He became the first Texas freshman to start at quarterback in his first game since Bobby Layne back in 1944. He became the first UT quarterback since McCoy in 2009 to pass for 2,500 yards and 20 touchdowns; he was the second-fastest in UT history to reach 2,000 passing yards and set a true freshman quarterback record with 313 yards of total offense against the Fighting Irish. He completed 60.4 percent of his passes and was named the Big 12’s newcomer of the week three times. It was an up-and-down season for both the Longhorns and Buechele, who did suffer through inconsistency and injury.

Buechele showed a knack for attacking defenses vertically and to the edge, which is required in the Air Raid offense employed by Charlie Strong in 2016. Buechele must adjust to Tom Herman and offensive coordinator Tim Beck’s scheme to hold onto his job long-term, though.

Durable and accurate. It never got much attention last season since Buechele never missed any time, but he played the back half of the season with a serious hand injury. That’s in addition to getting body-slammed at California, a blow that forced him to temporarily leave the game.

The Longhorns have just two legitimate quarterback choices this season — Buechele and freshman Sam Ehlinger. Herman simply couldn’t get the stars to align and get a graduate transfer admitted into UT. So the Longhorns must make do with two, although receiver Jerrod Heard is an emergency option.

All quarterbacks must be accurate. Buechele won over this coaching staff with his accuracy as spring practice went on. While he’s not a runner, Buechele can fit the ball into tight spaces. Herman also wanted him to be more vocal. After one scrimmage, Herman said, “I heard him scream, which was really cool.” That’s progress.

The post The Texas 22: Starting at quarterback — Shane Buechele appeared first on HookEm.