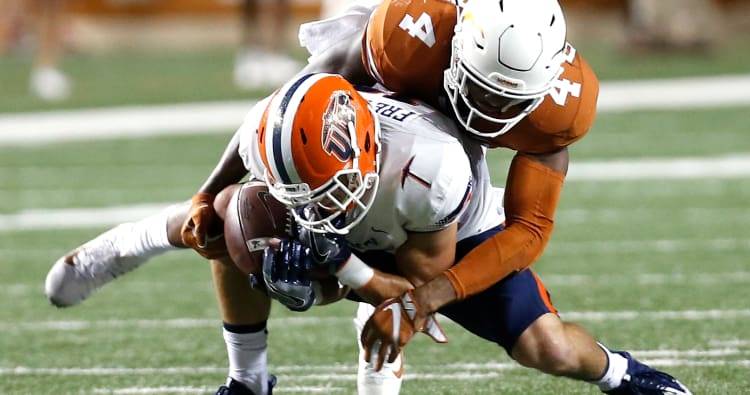 1. The Hit heard ’round Royal-Memorial Stadium — on Notre Dame receiver Torri Hunter Jr., separating receiver from football in the end zone in the second half of last year’s season-opening win.

2. A week after that touchdown-saving hit, Elliott came up big again in a win over UTEP when he sacked Miners quarterback Kavika Johnson for a 17-yard loss; UTEP eventually had to punt and Texas scored a touchdown for a 20-7 lead just before halftime.

3. He’s got three career interceptions, but two of them came on the same day — at Kansas in 2015.

Elliott, who was a four-star safety out of Rockwall-Heath, was one of Charlie Strong’s top defensive signees from the 2015 class, Strong’s first start-to-finish class at Texas. He was the third-rated UT defensive signee that year behind linebackers Malik Jefferson and Anthony Wheeler. Elliott held 13 offers and chose the Longhorns over Texas A&M and TCU.

Elliott ranked No. 18 on our 2015 Fabulous 55 and was the No. 10-ranked safety in the class and the No. 182-ranked overall prospect in the nation per 247Sports’ composite ratings. Known as a hard-hitting enforcer, he was chosen to participate in the 2015 Under Armour All-America Game.

WHO ELLIOTT HAS BEEN HERE — SO FAR

Elliott made his UT debut against Oklahoma as a freshman in 2015. He ended up playing in seven games that year after missing the first part of the season with an injury. Despite that lack of consistent playing time, he showed his knack for big plays with two interceptions. He finished the year with 13 tackles.

Elliott earned one start in 2016. He stayed healthy and played in all 12 games but inconsistency meant he spent as much time on the bench as on the field. He ended the year with 30 tackles and a sack.

Texas’ safety spot has gotten a makeover — Dylan Haines and his 33 career starts is no longer here and the Longhorns look ready to bring Jason Hall, a senior with 28 starts, off the bench. That means Elliott will need to play more like a veteran and less like a player with a single start on his résumé. Right now that doesn’t seem to be a problem; Elliott was the defensive MVP in UT’s first scrimmage and made a goal-line stop to win last weekend’s second scrimmage. Earlier this month Tom Herman lauded Elliott’s leadership: “Right now he’s walking the walk in terms of work ethic, (a) very articulate and vocal guy and has a knack for saying the right thing at the right time.”

The post The Texas 22: Starting at safety — DeShon Elliott appeared first on HookEm.