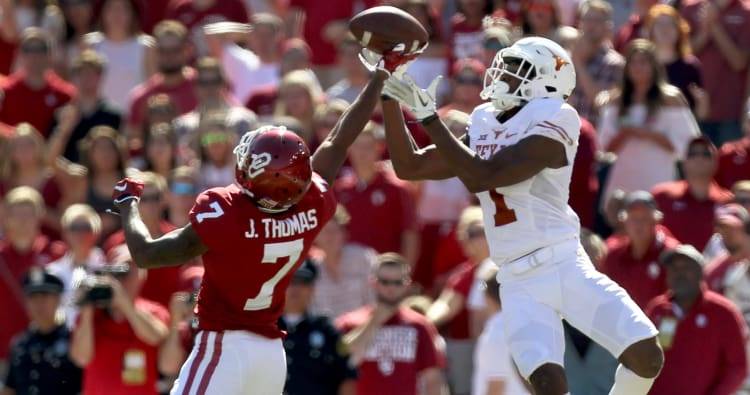 A year ago, it seemed a certainty Jordan Thomas would be in an NFL training camp right now. The Oklahoma cornerback entered his junior season as one of the top defensive backs in the country and the No. 1 draft-eligible corner according to NFL Draft analyst Todd McShay. So why is he back?

Thomas’ character has come into question after multiple suspensions and arrests, including assault and public intoxication charges from summer 2016 that were later dropped. On the field, the Sooners’ defensive woes likely hurt his stock. After five interceptions in 2015, he only had two last year — although his 17 pass breakups were a career high. Oklahoma ranked 111th nationally in passing yards allowed.

Thomas’ job will be to shut down half the field. (A pair of sophomores — Parnell Motley and returning starter Jordan Parker — are competing for the other corner spot.) He’s certainly capable, but the Longhorns showed last year that he can be beat. Dorian Leonard and Devin Duvernay both made him look silly in Dallas.

Other than getting burned twice, Thomas had four tackles and four pass breakups in last year’s win over Texas. In 2015, he made four stops and broke up a pass. He didn’t play in the Red River Rivalry as a freshman.

The post Top opponents for Texas in 2017, No. 18: Oklahoma CB Jordan Thomas appeared first on HookEm.