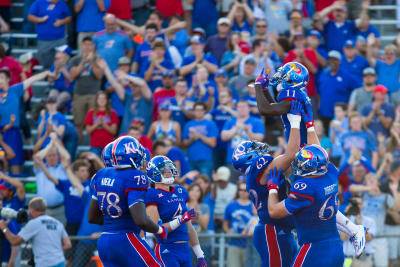 David Beaty may be the Big 12’s most upbeat coach. And he hired Doug Meacham, who helped mold TCU into a high-scoring, national title contender, as his offensive coordinator.

But it remains to be seen how much the Jayhawks can do to improve an offense that ranked 106th nationally last year. Only 22 teams were below Kansas in the national statistics and none of them were from the Big 12.

In Lawrence, there’s an ongoing competition for the starting quarterback job — roommates Carter Stanley and Peyton Bender are vying for the top spot.

Stanley ended the season as the starter and led the Jayhawks in their season-defining upset of Texas. Against the Longhorns and in the season finale against Kansas State, Stanley threw for a combined 522 yards.

Bender is the transfer from Washington State. He trained in Mike Leach’s offense, which has its genesis in the Big 12. Bender played in five games with the Cougars, starting against Washington. For the season, he completed 53 of 91 passes for 498 yards. He transferred to Itawamba Community College in Mississippi where he played last fall. In nine games he averaged 304 passing yards.

“I think we’ve got two very talented guys there that are operating this offense at a really high level, which is good,” Beaty told reporters earlier this month.

Depth at receiver took a huge hit as camp started. Beaty dismissed LaQuvionte Gonzelez for a violation of team rules. Gonzalez, a transfer from Texas A&M, caught 62 passes for 729 yards last season, his first with the Jayhawks.

But there other good options at receiver. Sims led all Jayhawks in receptions in 2016. And there’s Daylon Charlot, a transfer from Alabama. Charlot, when he signed with the Crimson Tide, was ranked as the 90th best overall prospect in the country by 247Sports’ composite ratings. He also was the ninth best receiver nationally that year. He was one of only two receivers signed by the Crimson Tide that year; the other was Calvin Ridley, now a sophomore who had a 1,000-yard season in 2015 and has 14 touchdowns the past two years.

Kansas likely will use a rotation of tailbacks, probably led by Herbert. But expect Taylor Martin, considered the team’s fastest player, to get some carries.

“I like a one-two punch. I like a little scat, twitchy guy and I like a bigger guy — a hit it up in there guy — where you have two different flavors,” Meacham told reporters.

The post Triplets of the Big 12: Kansas appeared first on HookEm.