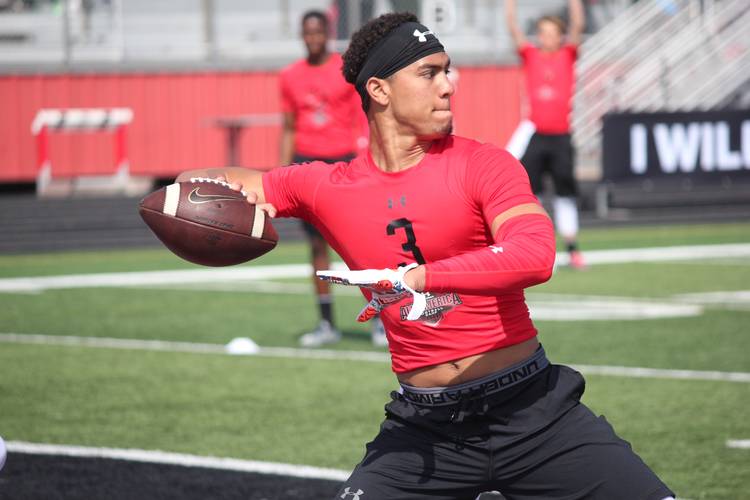 Texas’ 2018 recruiting class is nearly full. The Longhorns hold 17 commitments heading into mid-August. Tom Herman’s program is expected to sign around 22 prospects. Texas is still searching for another wide receiver, an offensive lineman, a couple of defensive linemen and a pair of cornerbacks before moving most of its effort onto 2019.

The recently updated Fabulous 55 included 11 of Texas’ 12 in-state commitments. Five of the Longhorns’ 17 commitments are from out of state. The Fab 55 is our list of the state’s top recruits, so those five out-of-staters can’t be on it. But what if they could? Here’s where each recruit would fall on that Fab 55.

Where would Adeoye rank? Top 10

Adeoye — so far Texas’ top out-of-state pledge — is from St. Louis but will play his senior season at IMG Academy in Florida. He’s a versatile linebacker with a physical streak suited for the middle position. He’s capable of playing on the edges because of his speed but lacks the ideal height to be an edge rusher in Todd Orlando’s scheme. It’s hard to find true Mike linebackers in modern-day high school football. Adeoye is a hard-nosed linebacker that Texas can build a defense around in the coming years.

Where would Rising rank? Top 15

Rising is one of two quarterback commits from out-of-state. It’s a down-year for in-state quarterbacks and Herman’s staff was forced to look beyond the border. Rising is a four-star listed as a pro-style quarterback, but he possesses enough athleticism to run Herman’s preferred offense that’s centered around a mobile quarterback. Rising is a prolific passer with uncanny efficiency, throwing more than 40 touchdowns to just one interception as a sophomore.

Where would Moore rank? Top 25

Moore’s height, or lack thereof, keeps him from ranking among the nation’s best wide receivers. His sprinter’s speed earned him an invitation to The Opening Final, where he finished second in his heat in the 40-yard dash competition and was laser-timed at under 4.4 seconds. Moore’s a slot receiver with the ability to play running back in certain sets. He’s also a return specialist who can provide instant play-making ability on special teams and on jet-sweeps.

Where would Moore rank? Top 40

Thompson is the second of Texas’ two out-of-state quarterback commits. An Oklahoma legacy, he chose the Longhorns early over a host of other offers, including North Carolina and Tennessee. Moore is a true dual-threat quarterback who relies on his legs and his arm to create offensive success.

Where would Wood-Anderson rank? He wouldn’t (JUCO)

It’d be unfair to rank Anderson-Wood among a list of high school prospects because he’s older and more developed physically and mentally. He surprised the recruiting world when he chose Texas over Alabama and Louisville on Aug. 1. He’s a big-bodied tight end ready to contribute as soon as he arrives on campus. He’ll have three years to play two seasons. The Longhorns need depth and talent at tight end since the previous offense didn’t call for pass-catching specialists. Wood-Anderson is a three-down tight end capable of blocking the edge and catching passes.

The post Where would Texas’ 2018 out-of-state recruits rank on the Fab 55? appeared first on HookEm.