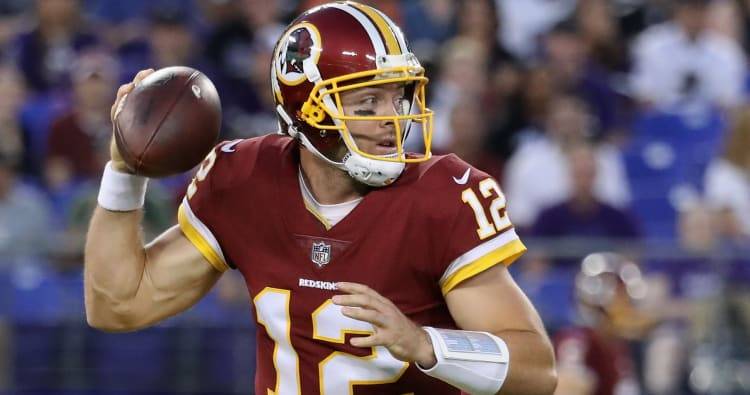 The last quarterback to lead the Texas Longhorns to a national championship game, Colt McCoy, had a so-so night against the Ravens in his first action of the preseason. McCoy was 6-of-13 for 40 yards and threw an interception. With Kirk Cousins being named franchise player for the second straight season for Washington, McCoy might find himself a candidate to take over the offense next season.

Another veteran—one looking to bounce back from a variety of injuries—Jamaal Charles has yet to suit up for his new team but is expected to play in the third week of the preseason. Once unthinkable, Charles is in danger of not making the Broncos roster since the team has C.J. Anderson, De’Angelo Henderson, Devontae Booker and Stevan Ridley in the mix.

Someone not in danger of being cut is Kenny Vaccaro of the Saints. He had two tackles in his first preseason game and will likely have to make a lot of tackles this year. He’ll have another former Longhorn to help out as Alex Okafor signed with the team in the offseason. Both are in their fifth year in the league.

The Saints aren’t the only team with multiple Longhorns on the roster. The Eagles have linebacker Jordan Hicks and wide receiver Marcus Johnson. Hicks is a lock to remain on the team, Johnson will need some help to make the 53-man roster. Though, the Eagles trading Jordan Matthews to the Bills could help.

Also in the NFC East, the Giants have another former Texas linebacker on the team. Keenan Robinson didn’t participate in the loss to the Steelers Friday as he’s working his way back from a concussion.

Someone used to dishing out big hits while running the 18-wheeler package at Texas is Tyrone Swoopes. He’s converted from quarterback to tight end and is taking his shot at a career in the NFL with the Seahawks. He had a decent game, catching two passes for 26 yards in a big win over the L.A. Chargers. Former Longhorn and defensive stalwart Earl Thomas returned from last season’s injury but didn’t log a stat.

The Seahawks faced another defensive back out of Texas, Adrian Phillips, in the win. Phillips had five tackles in the game.

Brian Orakpo didn’t log a stat in the Titans’ 7-3 loss to the Jets. Orakpo proved to be a great signing by the Titans in the 2016 offseason. His 10.5 sacks was half of a sack shy of tying his career high which he set in his rookie year.

Marquise Goodwin, the former wide receiver and track star at Texas, made his debut with the 49ers on Friday, catching one pass for 14 yards. Also with the 49ers is Nick Rose, battling with Robbie Gould for the place-kicking spot. Rose was 2-for-2 while Gould missed a field goal.

Someone who doesn’t miss field goals is Justin Tucker. Tucker seems to be picking up where he left off last season. He connected on three field goals against the Redskins last Thursday, including a 59-yarder.

Another consistent Longhorn in the NFL is Derrick Johnson. The veteran linebacker is entering his 13th season. He made one tackle in the loss to the 49ers. Joining Johnson on the Chiefs this season will be Roy Miller, who moved over from Jacksonville in the offseason. Miller’s 2016 season was cut short by a torn Achilles. The two have that injury history in common.

Quandre Diggs and a former teammate at Texas, Hassan Ridgeway, met up in the first week of the preseason. Neither logged a stat in the Lions’ 24-10 win.

The Bengals have another pair of Longhorns working to contribute. Cincinnati’s looking for Trey Hopkins and undrafted rookie Kent Perkins to help a trio of capable running backs pick up junks of yards. The first week of preseason was a good start as the Bengals rushed for 140 yards against the Buccaneers.

Sam Acho had a tackle in the Bears’ 24-17 loss to the Broncos. Lamarr Houston was held out as he attempts to return after a torn ACL he suffered last season. Houston has torn his ACL in two out of three years.

Geoff Swaim, a tight end for the Cowboys, was targeted just once in the 13-10 loss to the Rams. He might be a little concerned that Rico Gathers, a former Baylor basketball star playing tight end, has caught two touchdowns in two weeks. Meanwhile, teammate Duke Thomas was second on the team in tackles with five. The former defensive back for Texas might have a shot at playing in the defensive backfield in Dallas once the practice games are over.

On the other side of the ball in that game was Malcolm Brown, former running back at Texas. He gained 25 yards on five carries and had one grab for eight yards. He won’t start over Todd Gurley but could prove to be a valuable backup.

Paul Boyette Jr. made a tackle and hit the quarterback in his debut with the Raiders as he tries to make the team as an undrafted rookie free agent. The Raiders lost to the Cardinals, in part due to the kicking prowess of the old veteran Phil Dawson. Dawson was 2-for-2, including a 43-yard field goal.

The post Longhorns in the NFL: Preseason appeared first on HookEm.