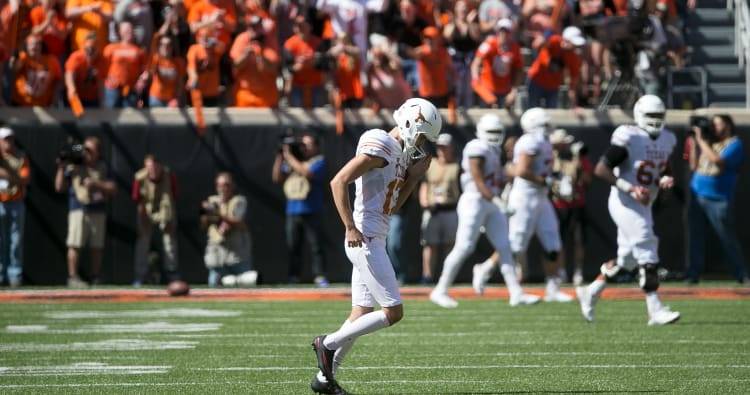 Tom Herman refuses to call specialists by their name. “Until they graduate,” the Texas coach said earlier this month. In Herman parlance, it’s the Kicker, the Punter, the Holder, etc.

The Punter, ol’ what’s-his-name who was a Ray Guy finalist last year, is cool with that.

“I laugh at it. I think it’s funny,” said No. 13, which according to the roster is still the Australian-born Michael Dickson. “People complain and say we don’t do much on the sideline, and blah, blah, blah when we’re not hitting. But I respect everyone and they respect my job. It’s nothing to get offended about.

After Wednesday’s practice, Dickson left no doubt that Herman “takes everything seriously” when it comes to special teams. That shouldn’t be a surprise, really. Herman was the special teams coach at Sam Houston State from 2001-04.

It’s the placekicking that did Strong no favors. Critical missed field goals and missed extra points have cost the Horns momentum and victories over the last three years. Last season alone, Texas had five kicks blocked, including three extra points against Oklahoma State.

“Unacceptable,” Herman said earlier in training camp with a stern look. “One blocked kick on the year, whether it be a (point-after touchdown), field goal, or punt, is too many, and the stats back that up. You block a punt, your chances of winning that football game increase substantially just from that one statistic.”

Herman and special teams coach Craig Naivar took a hard look at special teams during the offseason. This season, expect to see more starters on the special teams units, which are now dubbed “special forces.” The punt unit is called the “A-Team,” for example.

Strong didn’t focus on recruiting kickers. He almost waited too long last summer before one finally fell in his lap. Graduate transfer Trent Domingue didn’t get his scholarship renewed at LSU and came to Texas. He was 5 for 12 on field goals from 30 yards or longer.

Herman went after transfer Joshua Rowland from Mississippi Gulf Coast Community College. He was No. 1-rated junior college kicker in the nation, according to 247Sports, after making 9 of 12 field goals and 32 of 33 extra-points last season.

“Little dude’s mental toughness is tremendous,” Naivar said. “We’ve put him in some situation where we’ve had a lot of stuff going on. And he’s done a good job with that. Now, when you have 105 guys yelling at you versus 105,000, that’s a different deal. We’ll find out when those situations happen.”

As if that wasn’t enough, Herman has already secured a commitment from Lake Travis senior Cameron Dicker, projected as the No. 1 kicker nationally in the 2018 recruiting class. Herman also welcomed graduate transfer Kaleb Smith, a 6-3, 275-pound snapper from Oklahoma State. Per NCAA rules, graduate transfers can go anywhere and play immediately, even if they wish to transfer within the same conference.

Herman said Smith should help because he’s “got a little bit more girth on him to protect the A-gaps.”

Several players have given a laundry list of names for those attempting to return punts. Jerrod Heard’s name has been on everyone’s list. Armanti Foreman has the most experience returning. He had eight chances last season and averaged 8.6 yards per return.

If anything, Herman has given special teams far more lip service than Strong ever did. Maybe that alone is a sign things might change.

Triplets of the Big 12: Baylor