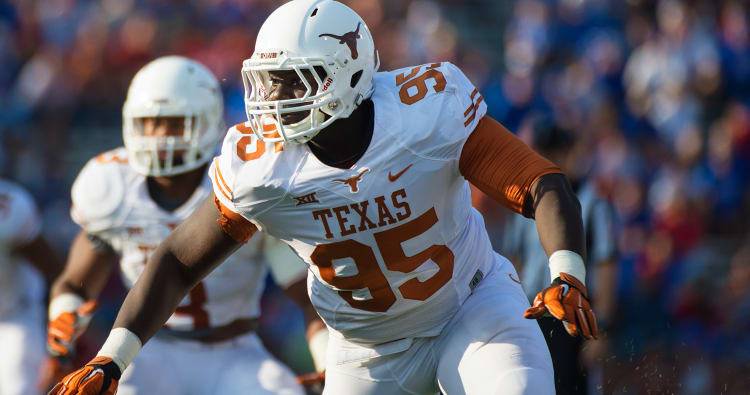 1. Texas had five sacks against UTEP last year, but the Longhorns should have had six — Ford’s sack was taken away because of a penalty when he took a bow in the Miners’ backfield.

2. The 2015 season-ending 23-17 win over Baylor was sealed in part by Ford’s big forced fumble and fumble recovery on fourth down with 2:31 to go. The Bears had scored on their three previous drives.

3. Another big Baylor moment: Earlier in that game, Ford went low to take out the Bears’ 410-pound ball carrier LaQuan McGowan. That was a 715-pound collision that ended up as a simple tackle on that day’s box score.

Size was always the question mark for Ford. Well, height, more specifically. The big man from South Carolina was a four-star prospect and the sixth-ranked player in his state. He committed to Louisville and head coach Charlie Strong right before his junior year, then decommitted as soon as Strong left for Texas. After listening to overtures from South Carolina and Missouri, he visited Oregon a little more than a week before national signing day. The very next day, he committed to Texas. He picked the Longhorns over 23 other schools.

Ford was the No. 22-ranked defensive tackle of the 2014 class and the nation’s 267th-rated overall prospect per 247Sports’ composite rankings. He was a model of production as a prep player, posting video game stats. As a junior he had 154 tackles and 10 sacks. He followed that up with 135 tackles and seven sacks as a senior. Ford recorded 72 tackles for loss over his final two seasons.

Ford’s strength, first step and tenacity were considered strengths as a prospect. He’s used those same skills to earn a starting spot at Texas.

WHO FORD HAS BEEN HERE — SO FAR

Ford didn’t make an impact as a freshman in 2014 despite playing in nine games. He didn’t make more than two tackles in a single game. He did, however, show the strength and tenacity that he’s become known for. He played in all 12 games as a sophomore, finishing the year with 39 tackles, 2.5 sacks and a forced fumble. He locked down the starting tackle spot as a junior and became one of the few leaders on a struggling Longhorns defense. Forty of his 54 tackles were solo stops. He earned honorable mention kudos on the coaches’ All-Big 12 team last year.

New defensive coordinator Todd Orlando has said he plans to have Ford, who was the defensive MVP of the second scrimmage last weekend, on the field between 50-55 plays each game. When he’s lined up at either nose guard or defensive tackle, Texas will need him to use his 305-pound frame to stuff the run, a skill that helped guide Texas to be the Big 12’s fifth-best run defense last year, allowing 189.8 yards per game. Big 12 teams can pass as well, however, so Ford is also going to have to help apply pressure on the quarterback. (Ford didn’t record a sack last year, but his presence surely paved backfield paths for teammates on a defense that ranked fifth nationally with 3.42 sacks per game.)