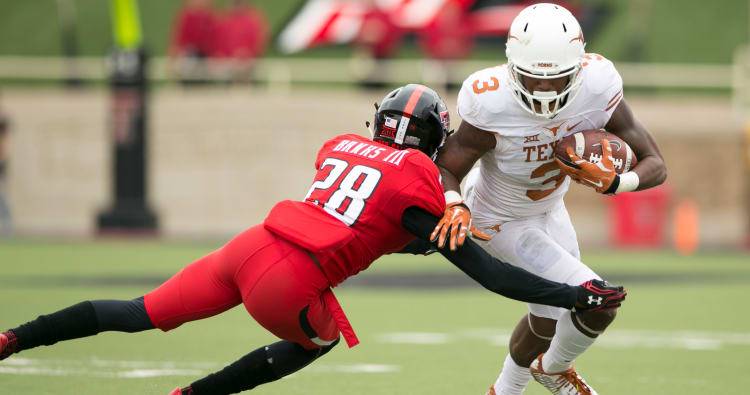 1. In what’s been one of his most important catches, Foreman adjusted his sideline route on a Shane Buechele throw vs. Baylor last year, a 38-yard gain with just more than 2 minutes left in the game. It brought Texas to the end of field goal range, which the Longhorns did convert for the winning kick. He had four catches for 142 yards and a touchdown on the day.

2. Who scored the first Texas points of 2016? It was Foreman, on a nifty 19-yard catch as he was falling out of bounds in the end zone. It helped the Longhorns tie 10th-ranked Notre Dame 7-7 in the first quarter.

3. Foreman’s longest catch of his career came courtesy of his legs; Tyrone Swoopes tossed it to Foreman in the left flat and Foreman sprinted down the sideline untouched for a 73-yard screen pass score against TCU in 2014. It came in the fourth quarter and cut TCU’s lead to 27-10.

A four-time all-district nominee, Foreman was one of the jewels of the 2014 class inherited by Charlie Strong after Mack Brown’s departure. Foreman was a four-star wide receiver out of Texas City, where he recorded 149 catches for 3,067 yards and 32 touchdowns in his prep career. He averaged more than 20 yards a catch, adding 895 yards and nine touchdowns as a rusher.

Foreman ranked as the No. 19 player on the 2014 Fabulous 55. He was the No. 17-ranked wide receiver in his class and the No. 111 overall prospect in the nation, per 247Sports’ composite. Foreman held nine offers, choosing Texas early in the process over programs like Oklahoma, Texas A&M and Florida.

His twin brother, D’Onta, was the second-lowest rated commit in Texas’ 2014 class. D’Onta ended up rushing for 2,000 yards as a junior and now plays for the Houston Texans. (Recruiting isn’t an exact science.)

WHO FOREMAN HAS BEEN HERE — SO FAR

Foreman started his Texas career at receiver and kick returner, leading the team with 11 kick returns as a true freshman in 2014. He had a coming-out party against TCU, catching four passes for 91 yards, including a 73-yard touchdown, and he finished the season with 10 catches for 188 yards and two touchdowns.

His numbers didn’t improve as a sophomore as Texas’ passing game struggled. He finished the 2015 season with just 11 catches for 182 yards and two touchdowns. That year he played in 10 of Texas’ 12 games, starting six. While his brother enjoyed national success as a junior in 2016, Foreman also increased his output and became a valuable member of the offense. He led the team with 34 catches for 420 yards. He scored three times and averaged 12.4 yards per catch.

A motivated teammate. There were times last season when Foreman would slip into funks. Either he wasn’t getting the ball enough or the offense wasn’t moving as much as he liked. He had a breath-taking touchdown catch against Notre Dame in the season opener. But he finished with just three scores for the entire season.

Now, think about his winter and spring. Foreman spent the entire offseason watching and hearing the accolades pile up for his brother with the Houston Texans. D’Onta was the one posing outside mall stores after taking his friends on a shopping spree. D’Onta was the one buying up fancy jewelry and whatnot. That’s his money, not Armanti’s. It’s hard to imagine a stronger motivating force.

That doesn’t mean Foreman should demand the ball. He simply needs to play his role within the offense and the opportunities will come. Remember, when the Foreman brothers were growing up, Armanti was usually the brighter star. The tables turned last season, but he now has the Texas stage to himself. Time to shine.