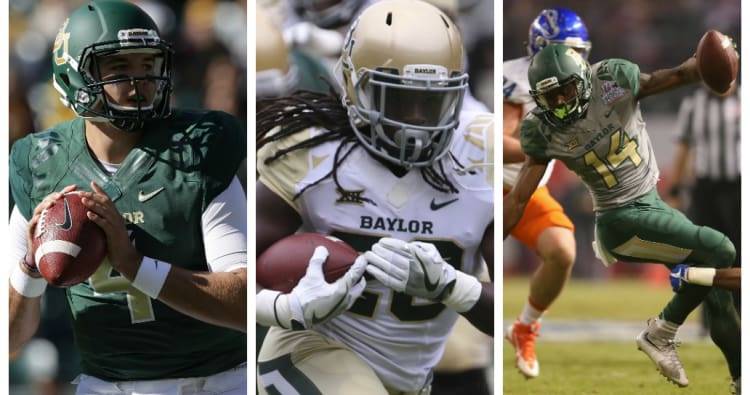 We’re all waiting to see what the Baylor offense might look like now that the Bears have removed all traces of what Art Briles ran in the days when the Bears boasted the best stats in the country.

Rhule likes old-school, run-oriented offenses. He likes a fullback and a tight end. But he also realizes that to compete in the Big 12, he needs to score lots of points to keep up with most every team in the league.

Matt Lubick, Rhule’s first hire at offensive coordinator, left to go back to Oregon after a month on the job. Rhule’s co-coordinators now are Jeff Nixon, who worked for Chip Kelly and the San Francisco 49ers last season, and Glenn Thomas, who was with Rhule at Temple. Like Nixon, Thomas also has worked in the NFL, serving as quarterbacks coach for Atlanta. But Nixon also knows the Kelly offense, which took off at Oregon.

So the best guess is that Baylor will field a wide-open offenses, but with some NFL discipline.

“I could probably give it a cool name like ‘Power Spread,’ but at the end of the day we’re going to spread it out,” Rhule told reporters.. “I think the biggest change will be tempo, but we’ll spread out, because that’s the players we have. I don’t think we’re going to line up in the I (formation) and run the ball like the Nebraska Cornhuskers did in 1994. But, I do think that when you need to get a yard and the game’s on the line, I want to know that I can line up and go to our bread and butter and feel like we can get a yard.”

The quarterback situation is unclear. Smith, who was forced into early action last season because of injuries and transfer, ended the spring a top the depth chart. Smith has the Cactus Bowl victory over Boise State on his competitive resume. Former Arizona starting quarterback Anu Solomon signed with Baylor in January without having been to Waco. He’s got one year of eligibility after starting 27 games and throwing for 6,922 yards and 49 touchdowns with the Wildcats. Freshman Charlie Brewer, who won a state championship at Lake Travis High School, also is vying for playing time.

The Bears don’t have much depth at tailback now that Terence Williams, who rushed for more than 1,000 yards last season, has been ruled out for much of September as he rehabs from off-season shoulder surgery. Hasty, a sophomore, should be the main guy. He might be the only guy until Big 12 play starts.

The Bears lost Corey Coleman and Ish Zamora to the NFL and after both decided to leave school early. That left Platt, who is an intriguing player. He’s Baylor’s top receiver and he could see time at cornerback. He juggled spring practice with track, where he ran the 400 meters. He earned All-America honors as part of Baylor’s 4X400 relay.

The post Triplets of the Big 12: Baylor appeared first on HookEm.