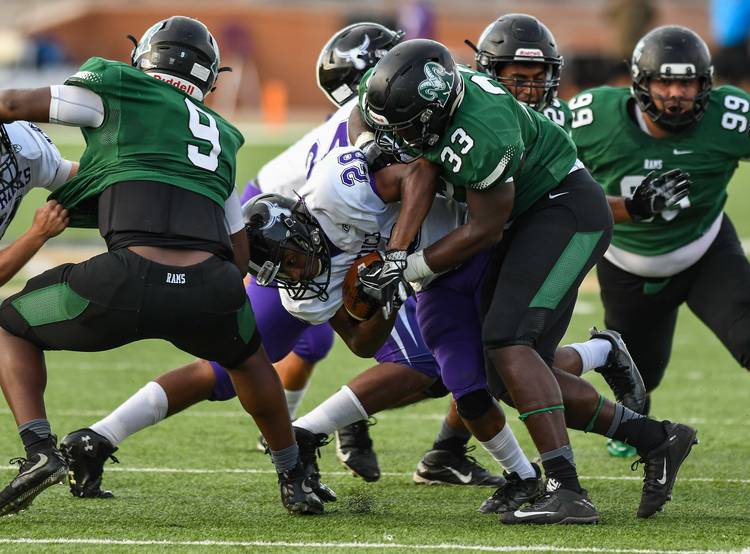 Katy Mayde defensive lineman Marcus Stripling bulls his way to tackle a running back during the team's game game against Morton Ranch High on Sept. 24, 2016 at Rhodes Stadium in Katy (Mark Goodman/For the Katy Times)

With a bulk of Texas’ 2018 recruiting class locked in, the Longhorns will shift some of their attention toward the 2019 class. Dual-threat quarterback Roschon Johnson of Port Neches-Grove High School is Texas’ lone commitment of the cycle, having committed July 21 at the Stars at Night recruiting event.

Leal is the top tackle in Texas for the 2019 cycle and the Longhorns quickly made him a priority by extending an offer during the offseason. If location plays a factor for Leal, the Longhorns figure to be in good shape throughout his recruiting process. The football talent in San Antonio continues to improve and Leal is one of the latest examples. He can play nose tackle or defensive end in an odd-man front.

Had a good time at UT #Hookmeup pic.twitter.com/4HF0N1pUyB

Thibodeaux is simply too good not to offer. He’s arguably the top defensive end in the entire cycle and holds offers from more than 20 top programs across the nation. Texas doesn’t appear to be a current factor in his recruitment, but Herman has already showed he can recruit California when he reeled in quarterback Cameron Rising, a 2018 pledge.

Herron Jr. is a Michigan commit who isn’t rumored to be looking around at other schools. Texas wouldn’t have a shot at the four-star prospect unless he opens his recruitment and makes it to campus for an unofficial visit.

Mowry is a versatile end and one of the better prospects along the defensive line in the state for 2019. The Texas staff is already familiar with Katy Taylor, having extended an offer to fellow defensive end and Texas A&M commit Max Wright in the 2018 class.

Stripling is arguably the top defensive end in Texas during the 2019 cycle. He’s big enough to hold the point of attack against the run and is an elite pass rusher because of his brute strength and quick first step. He’s one of the top targets for Texas in the 2019 class.

Brooks is currently Texas’ lone offer at linebacker. He’s a physical specimen at 6-3 with the ability to jump over cars — literally. He holds more than 20 offers and Texas is considered to among his favorite schools heading into his junior season.

Jump over the car challenge

Elite talent from Louisiana rarely escapes LSU’s grasp when the Tigers want a prospect. LSU wants Stingley and its likely he’ll end up a Tiger. But it never hurts to offer and Herman has ties to the Louisiana area after coaching at Houston.

Banks is the only in-state cornerback currently with a Texas offer. He’s the only three-star prospect on the defensive side of the ball with an offer. The staff should already know exactly what it likes in Banks having spent time at Dekaney recruiting tight end Malcolm Epps, a 2018 commit; it never hurts when a teammate and upperclassman can help recruit a younger player with an offer for an entire school year.

Williams ranks No. 1 on The Next 25, a list of the top 25 2019 prospects in Texas. He started as a freshman on the varsity level and his reputation as an elite defensive back has grown with each passing season. Williams is a playmaker at safety with coverage skills.

Extremely Blessed to Receive an offer from The University of Texas! pic.twitter.com/m6woqOcJaf

Herman doesn’t fear the Red River. He holds a commitment from four-star quarterback Casey Thompson and once held a commitment from defensive end Ronnie Perkins, both Oklahomans. Hill is another player Texas must battle for against the Sooners and the Longhorns are most likely playing from behind.

Phillips isn’t regarded as an elite safety prospect, ranking No. 23 in the nation at his position. Texas spent time recruiting the southeast this offseason, including a ton of time in Georgia. The defensive staff saw something in him to extend an offer and he’s an out-of-state name worth watching.

The post A look at every Texas offer for 2019 — so far: Defense appeared first on HookEm.

Triplets of the Big 12: Kansas State