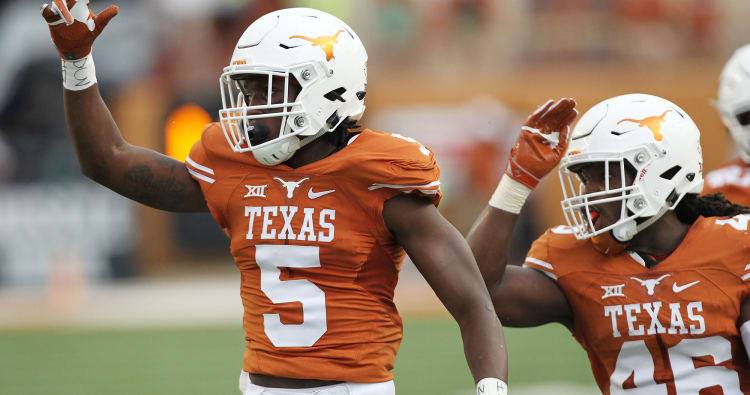 1. Texas scored two defensive touchdowns in a game for the first time since 2009 when Hill had a 41-yard interception return for one score and Hassan Ridgeway’s 34-yard fumble return against Oklahoma State.

2. Another 2015 highlight: Hill’s early fumble recovery against Texas Tech led to a Longhorns field goal and an early 3-0 lead. He had a career-high eight tackles against the Red Raiders.

3. Hill put a nice cap on his freshman season in Texas’ 23-17 upset win at Baylor. He set a season high with two pass breakups and four solo tackles.

Hill was a highly-touted cornerback who signed with Texas over offers from LSU, Texas A&M, Baylor and more. The 6-3 prospect was a four-star cornerback and was rated higher than fellow starting corner Kris Boyd back in 2015. Hill was the No. 7-ranked cornerback in his class and the No. 81-overall national prospect that year, per 247Sports’ composite. Hill was ranked No. 10 on the Fabulous 55.

The six cornerbacks rated ahead of him nationally? USC’s Iman Marshall (No. 1) has logged 25 starts his first two years; LSU’s Kevin Tolliver II (No. 2) started eight games his freshman year before running into shoulder problems last season; Florida State’s Tarvarus McFadden (No. 3) had shoulder surgery this spring but landed on Sports Illustrated’s preseason All-America list; Ohio State’s Kendall Sheffield (No. 4) signed with Alabama but later transferred to the Buckeyes; Alabama’s Minkah Fitzpatrick (No. 5) has been moved to safety; and UCLA’s DeChaun Holiday has yet to make an impact for the Bruins — and also isn’t even a cornerback anymore. He’s a linebacker.

It was the combination of Hill’s length and athleticism that led to him receiving more than 20 scholarship offers. He recorded 11 interceptions as a senior while also contributing as a receiver and on special teams. He got an invitation to The Opening in 2014 and also participated in the 2015 Semper Fidelis All-American Bowl. He earned District 20-6A defensive MVP honors as a senior and had 41 tackles, an interception and 11 pass breakups as a junior.

WHO HILL HAS BEEN HERE — SO FAR

Talent has never been an issue. Not many corners on the planet are 6-3 and can run with most wide receivers. But consistency is Hill’s hurdle to jump from potential to playmaker. He started the last eight games his freshman year, ending the 2015 season with 49 tackles and four pass breakups. He also returned an interception for a touchdown against Oklahoma State.

He failed to take that next step as a sophomore, however. He played in only five games and started only three. He spent the better part of 2016 in Charlie Strong’s doghouse and ended up with 21 tackles and a pass breakup.

Hill was a high school All-American and earned honorable mention honors on the All-Big 12 team as a freshman. The tools and promise are there if he can master his craft.

After his 2016 disappearing act, Texas needs Hill to take advantage of this fresh start with the new coaching staff and play more like the guy who was an all-conference player in 2015. His position coach, Jason Washington, said last week that they’ve been stressing consistency and technique with Hill, and added that he’s excited about pairing Hill with Kris Boyd in the secondary. Hill and Boyd, both of whom were top nationally-rated cornerbacks of the 2015 class, each broke up a pass during Texas’ spring game in April. The Longhorns’ depth at corner has been questioned; simply staying healthy this fall will mean a significant contribution to the defense.

The post The Texas 22: Starting at cornerback — Holton Hill appeared first on HookEm.